A Model for Conservation Practices on Amish Farms

Rambling across a scenic 75 acres in Lancaster County is the home and farm of Raymond King. King honors the Amish farming traditions that have inter-connected his family and community for many generations. At the same time, he is building on those traditions by incorporating conservation practices that will benefit his farm and the creek that runs through it for generations to come. One such practice is the use of no-till planting techniques, which have been used on the farm since 1979. No-till has kept the soil in place and the crops in good condition. Contour strips also add extra benefit and improve crops.

Working through CBF's Buffer Bonus program, and in partnership with NRCS and the Lancaster County Conservation District, King was able to plan and construct a variety of on-farm conservation improvements that will do for the rest of his farm what the no-till and contour strips have done for his fields; improvements like the construction of a new manure storage facility, a stormwater collection system, streambank fencing and crossings, and the planting of streamside trees and shrubs.

Wendy Coons, Soil Conservation Technician for the Natural Resource Conservation Service (NRCS) has been working with King for two years. "When we first met," Coons says, "he wanted to better deal with barnyard runoff, and he also wanted to improve his manure storage capacity. He wanted to be able to store excess manure for up to six months, thus allowing him to get through the winter without having to spread it onto his fields. We got all of that work, plus a whole lot more done on the farm."

Additionally, very important to any on-farm conservation improvement effort is having the required conservation and nutrient and manure management plans, which King now has.

King says, "I'm particularly glad to have a certified nutrient management plan. I had previously been broadcasting nitrogen, which, I learned was wasting time and money. The plan saves me both by showing me the correct amount of nitrogen to apply, when to apply it, and exactly where to apply so that the plants get the most benefit. My nitrogen lasts a lot longer and I'm saving money.

Manure Storage. Photo by Lamonte Garber/CBF Staff.
CBF hopes to demonstrate that on-farm conservation practices are very achievable within a community that has traditionally avoided interaction with government and outside groups. Lamonte Garber, CBF's Pennsylvania Agriculture Program Manager, says "Raymond's farm really addresses all the conservation needs that we might find on a Plain Sect farm and beyond. More and more farmers are willing to fence cattle out of their streams, but Raymond has restored a wider, forested buffer through the CREP program. He is even considering the option of permanently preserving the buffer to protect it for future generations. That commitment is to be commended."

Through the Buffer Bonus Program and all of CBF's watershed restoration work, CBF strives to create "clusters" of forested buffers and conservation improvements like those on King's farm on connected reaches of streams, in order to maximize impact. To do so means getting neighbors on board.

Ashley Spotts, CBF Buffer Specialist in Lancaster County, worked with King throughout the process and is encouraged by his willingness to install these conservation practices and his mindset toward sharing what he has learned with his neighbors and others. "As with any farming community, people learn about new techniques by watching what happens on their neighbors' farm and by talking to each other. We are encouraged by the prospect of installing a streamside buffer on a farm just downstream from Raymond. The neighbor has seen the changes happening next door and is now considering conservation practices on his farm." 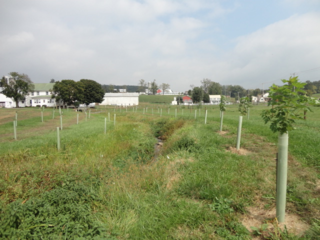 Photo by Ashley Spotts/CBF Staff.
Wendy Coons continues, "I consider King's farm a success story because he 'gets it' [conservation] and wants to pass on what he has learned about conservation to other farmers."

The end goal of CBF's efforts is the restoration of entire stream systems--restoring water quality, bringing back fisheries and aquatic life, and in some cases even removing streams from the state impaired waters list.

King's farm is a model for conservation improvements. The work done approximates what will be required of all farms in order to meet our clean water obligations for Pennsylvania and the Chesapeake Bay. It also demonstrates the benefits achieved through the collaborative efforts of agricultural and county agencies, nonprofit organizations, and conservation programs like Buffer Bonus.

Special thanks and credits to:

Mr. King and his family

Raeann Schatz, U.S. Department of Agriculture Farm Service Agency: The streamside buffer established on Mr. King’s farm was made possible through the Conservation Reserve Enhancement Program (CREP), administered by the Farm Service Agency (FSA).  Raeann Schatz is the FSA point person for CREP in Lancaster County, and her role is integral to achieving on-farm and water quality improvements. Meeting with farmers on their farms, and walking them through the program requirements and incentives has lead to a better understanding and increased interest in CREP in the Plain Sect communities of Lancaster County. Special thanks to Raeann for her efforts.

Chris Sigmund, Jeremy Weaver, TeamAg, Inc.: TeamAg is an agricultural consulting firm based in Ephrata, PA, and is a valued partner in our Buffer Bonus Program. Chris and Jeremy had early discussions with Mr. King regarding the creation a forested stream buffer on his farm.