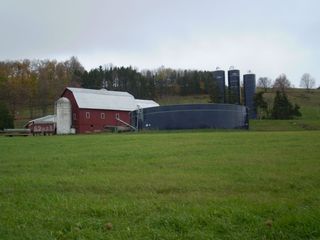 This is one in a series of articles about farmers in the Chesapeake Bay watershed who have implemented Best Management Practices (BMPs) to improve water quality and efficiency on their farms. As a result of these success stories, we're halfway to achieving the nutrient reductions needed to restore the Chesapeake Bay and its waters. View the rest of the series here.

For Mike Saxe Jr., a fourth-generation farmer, farming is more than a job: It's a way of life. The family farm, located in Sullivan County, Pennsylvania, has been operating since the late 1800s.

Together with his father, Mike Sr., they plant 150 acres of corn and 300 in hay annually, while managing another 200 acres of forest and pasture land. Twice a day, 365 days a year, they milk more than 140 cows with just one full-time employee to share the load.

It's a life he wouldn't trade for any other; but the demands are high. "If you're going to make this your life and your living, you've got to be efficient all the time," said Saxe. "The thing that's keeping people like us going is good management."

Farm Bill Helps Saxe Farm Make Improvements
That, he said, is where programs funded in large part by the federal Farm Bill come in. Funding programs like the Environmental Quality Incentives Program, or EQIP, have enabled them to make on-farm improvements like the installation of a concrete barnyard and a manure storage facility. Both help to improve farm production and water quality. "The importance of those programs can't be understated," Saxe said.

Funding through the Conservation Reserve Enhancement Program was used to establish forested buffers along the streams that run through the property, which are tributaries to the North Branch Mehoopany Creek. These forested buffers will provide habitat for wildlife, help keep water temperatures cool, and filter pollutants before they reach the water. "Saxe Farms is a good example of how farmers can utilize these programs to not only improve their operation, but to also help the environment," said Stephanie Eisenbise, CBF's Pennsylvania Watershed Restoration Manager. 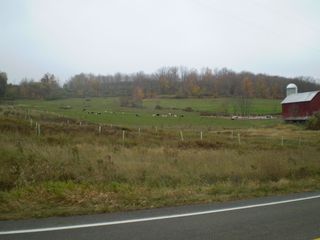 "The stream can have more biodiversity with a healthy forest surrounding it," says Jen Johns, Pennsylvania Stream Buffer Specialist for the Chesapeake Bay Foundation. "The tree root system traps nutrients that might be coming off of the fields, while also providing shade to cool the water. Both are critical to fish habitat and a healthy stream."

Saxe Farms has taken other measures, too. Roof gutters were installed on the barn to direct rainwater toward a grassy area, away from manure and a major walkway for the heifers. "None of these improvements would have been possible without the aid of agencies and groups like the Natural Resources Conservation Service, Sullivan County Conservation District, and the Chesapeake Bay Foundation," Saxe said.

A past recipient of the Sullivan County Conservation District's Conservationist of the Year Award, the Saxe's see themselves as stewards of the land. "It's easy to see that they care for the countryside and recognize their role in protecting it; that's important to them, especially given that Mike Jr.'s 13-year-old son is next in line on the farm."

Ensure that people like the Saxes are able to continue doing this good work on their farms.
Tell Congress to protect conservation programs in the Farm Bill!