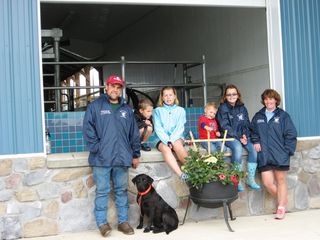 This is one in a series of articles about farmers in the Chesapeake Bay watershed who have implemented Best Management Practices (BMPs) to improve water quality and efficiency on their farms. As a result of these success stories, we're halfway to achieving the nutrient reductions needed to restore the Chesapeake Bay and its waters. View the rest of the series here.

Bill Houseknecht and his family live on and operate a 400-acre dairy farm in Bradford County that his father started 30 years ago.

Bill shares that "farming can be one of the hardest jobs out there--the hours are long, profits are narrow, and the tasks are physically demanding." But, he will also tell you that it is the most rewarding job, and the only one he and his family can imagine doing.

Long hours and narrow profits are two reasons why Bill is finding ways to make his farm operation more efficient. "Being extra conservative with valuable time and resources allows our business to succeed and gives my family time to do the other things we love--off of the farm--like coaching my kids' soccer team."

Farm Bill Helps Houseknecht Farm Reduce Manure Runoff
Funding provided through the Environmental Quality Incentives Program (EQIP) and assistance from CBF's voucher program enabled Bill to do something he didn't think possible--store manure until he was ready to use it by installing a manure storage facility. The installation cost for a storage facility can easily top $100,000. "That would have been pretty hard to put out completely on our own," Bill says.

The new storage facility allows him to store nearly 1.4 million gallons of manure, roughly the equivalent to seven months worth of manure. "We used to have to spread two loads a day throughout the year. Now we store it until we need it, spreading it primarily in the spring and summer, and maybe a little bit in the fall if we've got something growing," Bill said. "It's been a tremendous labor savings for us, especially in the winter when you don't have to worry about spreading it on the snow." 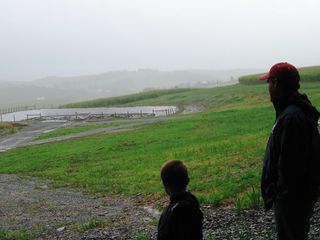 Conservation Funding Programs Benefit All Pennsylvanians
It's not just farmers who are benefitting from Farm Bill conservation programs; the public also reaps the benefits of investing in farm improvements. "This farm is in the northern part of the Bay watershed, and like they say, everything flows downstream," said Steve Smith, Pennsylvania Stream Buffer Specialist with the Chesapeake Bay Foundation. "When farmers are better able to control runoff from their farm--water quality locally and downstream improves. So making these investments is a win for everyone."

Through CBF's Buffer Bonus Program and the Conservation Reserve Enhancement Program (CREP), Bill was able to plant forested stream buffers in his pastures and fence the livestock out of the stream that flows through his property to Mill Creek. This will not only improve herd healthy but also the stream quality.

Ensure that people like the Senators are able to continue doing this good work on their farms. Tell Congress to protect conservation programs in the Farm Bill!