Home About Subscribe CBF Blogs Join Us Take Action Donate
Photo of the Week: Brownie's Beach Sunrise
Running for the Bay in 2014!

Save the Bay, Save Ourselves 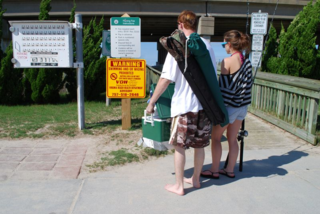 A sign posted by the State Dept. of Health warns people against bathing or wading after high bacteria levels were discovered in the water. One young couple was particularly disappointed after packing for an afternoon of surf fishing. Photo by Andrea Moran/CBF Staff.

Underwater grasses, oyster beds, clear water: They're well and good, but is the water safe for my kids to swim in? That's a question public officials and environmentalists must answer as they work to restore our waters.

My friend Meredith stopped me as I recounted a favorite Bay of yore story—about wading decades ago in lush seagrass beds that so cleansed and cleared the shallows you could see to dip crabs sequestered there to shed their shells.

I noted that we could bring back these conditions by reducing runoff of fertilizers and dirt from the land, which would also reduce summer "dead zones" of oxygen-starved water in the channels.

Meredith's an experienced environmental lawyer who got the ecological truth I was voicing; but now she's mother to Grace, 3, and Nicholas, several months. And the Bay question she gets from her current social circle along the Choptank River on Maryland's Eastern Shore is this:

Decades into the Chesapeake restoration, our focus continues on curtailing "eutrophication" by reducing the nutrients nitrogen and phosphorus that overfertilize the water, clog it with floating algae, rob light from the seagrasses, and quench aquatic oxygen.

We must continue with this; but it will take a deeper and wider engagement from citizens across the six-state watershed. And perhaps the long-gone seagrasses won't resonate to generations for whom the Bay of my Vietnam-era memories is as remote as the Bay of World War I is to me.

One opportunity to build a bigger constituency for restoration is to connect human health to Bay health. The overlaps between the two range from diet to climate change to air quality, to an array of toxins bad for both fish and us.

To get a sense of the issue, consider that the Bay and its rivers are riddled with health advisories limiting the consumption of everything from eels and striped bass to catfish and blue crabs to sport fish throughout Pennsylvania.

Another example where we might get more traction: Reducing air pollution further is regarded as a relatively expensive way to cut Bay pollution, even though airborne nitrogen is a significant bay pollutant.

But what if Bay managers and environmental educators included the benefits to human health, children especially, of reducing air pollution? The EPA estimates their value to Eastern states that include our watershed at $120 billion?

It's not that no one's tried to connect Bay and human health. The Chesapeake Bay Foundation made a fine report found on Google, Bad Water 2009. It links increased health risks from harmful bacteria and algae in Chesapeake waters to the nutrients that hammer Bay grasses and oxygen, and ties the heightened toxic risk to warmer Bay water, which is caused by climate change, which in turn is exacerbated by burning fossil fuels that deliver more nitrogen to the Bay.

The CBF report also links harmful nitrates in drinking water to regions with an overabundance of farm animal manure; regions that are also hotspots of Bay and river pollution.

Johns Hopkins' Center for a Livable Future has connected meat-heavy human diets to our health as well as the Bay's and shown that getting our nutrition from animals is linked to cancer and obesity. As for water quality, meat production means more fertilizer runoff to streams and residues of drugs fed to farm animals showing up in drinking water.

Increasingly, I find acknowledgement among Bay restoration leaders that fundamental changes in our agriculture will be needed to meet water quality goals, even as the official line remains that tweaks to the existing food system will suffice.

While toxics have the attention of many Bay groups, the governments managing the Bay have supported none of these approaches in a sustained manner and have failed to collect and make transparent enough data to build a solid understanding of environmental health connections.

A coalition of environmental groups is pushing Maryland's legislature to require reporting of who is using what agricultural chemicals and where they are applied. It's voluntary now, and required reporting would be a start toward better data.

Companies fracking natural gas in Pennsylvania and New York, and maybe soon in Maryland, do not have to disclose the chemicals they inject into groundwater.

After a false start in 2000, the EPA Bay Program, perhaps a good coordinating group for any "big tent," seems ready to take toxics more seriously. A recent EPA report shows nearly three quarters of the Bay and tidal rivers are partly or fully "impaired" by toxics—from mercury and PCBs to endocrine disruptors that may impair sexual development in fish.

The links between bay toxics and bay humans often aren't as neat as those between nutrients and seagrasses and oxygen. But as my friend Meredith pointed out—it's what people want to know and another way to involve them.