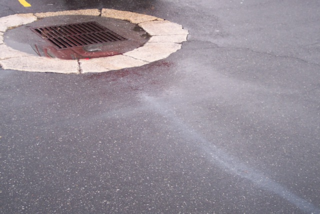 Stormwater conveys many pollutants - oily wastes, pet waste, sediment and fertilizers - from our streets and yards to our waterways. Photo by Leslie Middleton.

For clean-water advocates, local government leaders and those with higher political aspirations, one environmental issue seems to be trumping all others as this legislative begins in both Virginia and Maryland. And that issue is stormwater.

In both states, local governments are pushing back against recently enacted laws that are due to go into effect this year. Read more about the Maryland legislation here.

In Virginia, the stormwater regulations were supposed to take affect on July 1, 2014 -- after ten years of state agency and stakeholder compromise. But several bills in Virginia's legislative session, which began earlier this month, are seeking to delay or change these requirements.

But the regulations also require all local governments in Virginia to develop a “local program” for administering site plan reviews, permits, inspections, and collecting fees – and some local governments want more time to get these programs in place.

Regulations that were set to go into effect in 2011 have been delayed twice already, and proposed legislation would delay yet another year requirements that activists think are necessary to meet the Bay pollution diet and protect local streams.

“It’s not like this [requirement] has snuck up on any of them,” said Jacob Powel, policy and campaign manager for the Virginia Conservation Network.

Mike Toalson, Chief Executive Officer of the Virginia Association of Home Builders, agrees. He is a veteran of many of the advisory panels convened by the state to develop the regulations approved by the Virginia State Water Control Board in 2011.

“This has been a plan that has been ten years in the making. Everyone has been at the table.”

Toalson is sympathetic to local governments’ concerns about the regulations' costs, but he says that the homebuilding community agreed to higher permit fees so that there would be enough money for the local governments to administer the local programs.

And, he said, there are other benefits of the regulations – for the development community and for water quality.

Before, homebuilders applied for erosion and sediment control permits from local authorities but had to get water quality permits from the state. With the new regulations, developers will be able to obtain all their permits locally – and they will be consistent across Virginia.

“We’ve about 30% compliance with the current regulations,” Toalson said. As a result, the appropriate permits have not covered about 70% of land-disturbing activities in Virginia. The new regulations, said Toalson, will result in broader permit coverage, which in turn should result in more protection for local streams.

Virginia has provided money through a grant program to help local governments establish the local stormwater programs. Over $2 million in 2012 was distributed to help local governments develop these programs ($1.2 million for Bay watershed communities) and $1.8 million was distributed in late 2013 for the same purpose (including another $1.2 million for Bay communities).

Greene County, a rural but growing county in the central Virginia piedmont (2010 population 18,403), got assistance to establish their local program the regional soil and water conservation district using some of this state-provided funding.

Greene County supervisor, Jim Frydl, said: “We haven’t hired the extra people we’ll need, but we are ready to go.”

The development of stormwater regulations over the last ten years has been delayed by the need to align the 2011 regulations with the Bay Total Maximum Daily Load, or pollution diet. Programs were supposed to be in place by July 2013, unless the locality asked for a one-year exemption. They all did.

Peggy Sanner, senior attorney with the Chesapeake Bay Foundation in Virginia, recognizes that developing a local program has been a challenge for some communities. While stormwater permit fees are meant to help cover the costs of these programs, it takes time to build dedicated funding adequate to staff positions and establish the programs.

But she cites the amount of money and effort Virginia has invested in reducing pollution from point sources.

“From my perspective, it’s time to turn our attention to the only source of pollution that is still increasing in Virginia -- stormwater.” This, she said, is something that will have a direct and positive impact on our local streams.

Though four of the 11 bills have been withdrawn since Monday, activists and lobbyists in Richmond expect more to come in before the 3 PM deadline on Friday.

Tell your legislators: No delay, no dilution, no exemptions from Virginia's Stormwater Programs!