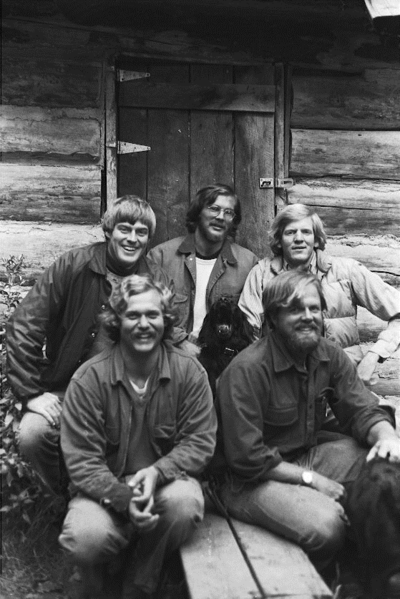 This year CBF's Smith Island Education Program celebrates its 35th Anniversary. Below its first educator and founder Bill Goldsborough reflects on the early days of the program, inspiring and transforming students in this unique island community.

I had never been to Smith Island when I was hired by CBF in September 1978 to start a field education program there. My initiation came during a weekend trip to nearby Fox Island. Don Baugh, Richard Maldeis, and I ran across Tangier Sound in one of CBF's T-Crafts on a mission to scout the area where we would soon be running field experiences.

We motored up Tyler's Creek from the south, flanking "Fishing Creek Marsh," a plot of marshland that CBF had purchased from local elders Paul and Ullie Marshall. We felt CBF would have standing as a landowner, and we would be able to preserve these fragile wetlands. Well, with hindsight, it didn't quite rise to the level of buying waterfront in Arizona, but the lesson learned was that you really can't "own" a tidal marsh in a traditional sense, and the tide was going to ebb and flow through its creeks and guts and keep the marsh alive and vibrant no matter who owned it on paper.

Nevertheless, the broad expanse of Tyler's Creek was beautiful that fall afternoon, at least until we ran aground. It was a sudden but not jarring experience as the mud bottom closed its grip on our boat and eased it to a stop. Lesson number two: the waters around Smith Island are very shallow! In fact, as we learned in many other encounters with the bottom and taught to the students on our field experiences, the landscape, above and below the water, is very flat. There are very few lines of elevation on either topo maps of the scant bits of upland or nautical charts of the local waters. The result, it turns out, is one of the most intimate intersections of land and water around and a microcosm of how the convergence of tidal and photosynthetic energy make the Chesapeake system so productive. 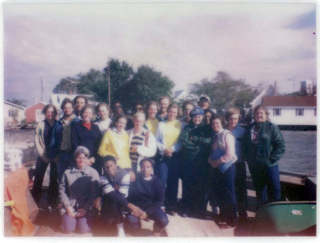 One of the first groups of students on CBF's Smith Island Education Program. Photo courtesy of Bill Goldsborough/CBF Staff.

CBF bought a house in Tylerton, one of three villages on the island, as the home base for our field programs. Many of my fondest memories involve that house, sold to us by Norwood Tull before moving to the "mainland" after a lifetime on the water. As a single family home with only one bathroom, it required a few modifications before it could support school groups of 20-plus students. Bunk beds were brought in, and kitchen capacity was expanded, but the biggest challenge proved to be installing a second bathroom, something Don and I barely completed lying on our backs in mud puddles under the house just hours before the first group arrived!

Once we were up and running, each three-day field experience brought that house to life. Dinners were daily adventures as the middle and high school students tried their hand at mixing crab cakes and frying oysters. Evening gatherings around the chalk board were like game shows as each kid competed to recount what we had learned that day. Eventually, faces appeared at the windows and back door as island kids let their curiosity get the best of them. The interactions that ensued were hilarious and heart-warming as island and suburban cultures intermingled. Many of those local kids became life-long friends, some even growing up to become CBF field educators.

During my two years on Smith Island, the reality of the flat landscape sank in as both the boundary for life on the island and the theme for the many field trips I ran. The twice-daily pulsing of the tide into the eight-mile long filigree of marsh determined where the ferry could run, where crabs, ducks, and terrapin could live, and where local watermen hunted for them. On field experiences we talked about "habitat" and how one inch more in elevation caused salt marsh cordgrass to give way to salt meadow hay and how that effected what could live there. It was a life-changing experience to be part of that community (human and biological) and to watch each group of students become suddenly aware of its natural rhythms.

Learn more about this and other milestone anniversaries for our Education Program in the latest issue of Save the Bay magazine.