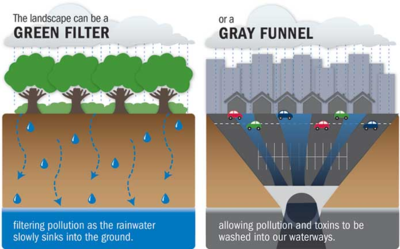 The following first appeared in The Capital last weekend.

If you live in Anne Arundel County there is a good chance your neighborhood will soon benefit from the county stormwater fee. By the same account, you will continue to endure flooded basements, closed swimming areas, and other problems if some state legislators get their way and block the county from collecting the fee.

Construction is pending on $76 million worth of projects that will benefit dozens of communities around the county. All the projects—special landscaping and upgraded retention ponds and outfalls—will slow down, and treat, polluted runoff. All were funded by the stormwater fee.

It's about time. Polluted runoff is the biggest, or one of the biggest, sources of water pollution in the county's many creeks and rivers. Communities throughout the county suffer as a result.

Manhattan Beach in Severna Park is an example. It's a quiet, family community on the Magothy River. Two tidal creeks surround Manhattan Beach: Dividing Creek and Cypress Creek. Like so many communities in Anne Arundel, Manhattan owes much of its identity, not to mention its real estate values, to its waterfront location. It has a boat ramp, two community beaches, and a clubhouse that looks out to the river.

But as with so many Anne Arundel neighborhoods, the water running through Manhattan Beach is often unhealthy. Of the 14 times Dividing Creek was tested for bacteria last summer, readings exceeded safe bacteria limits 12 times, with some readings 40 to 50 times above health limits, according to water monitoring completed through the Operation Clearwater program. The water at such times is more like toilet water than a natural creek.

What's the source of this problem?

A comprehensive 2010 study by the Department of Public Works found virtually all of the bacteria pollution in the Magothy River was the result of polluted runoff.

Rainwater flushes bacteria from dog waste, septic systems and other sources into local creeks. And bacteria is only one type of pollution discharged into the Magothy River and county creeks during rainstorms and snow melts. The water picks up chemicals, trash, lawn fertilizer, weed killer, and lots and lots of dirt. About 32 percent of the nitrogen pollution in the Severn River, for instance, comes from polluted runoff, 44 percent of the phosphorus pollution, and 82 percent of the sediment pollution.

Polluted runoff isn't a new problem in Anne Arundel. It's been around for decades. The public works department has made significant progress attacking it, but not nearly enough. The problem: no reliable source of funding for improvement projects.

Finally with the stormwater fee, the county this year was able to begin the improvements projects that will reduce polluted runoff in the Magothy River and in other county creeks and rivers. Manhattan Beach and numerous other neighborhoods will benefit.

These projects aren't cheap, partly because we've ignored this problem so long. Some state legislators have suggested that cheaper alternatives exist, such as reducing pollution at a dam on the Susquehanna River, encouraging citizen involvement with tax credits, and heavier fines for sewage spills. Some of these suggested actions already are underway, and others may have merit. But they aren't substitutes for local improvement projects in Anne Arundel.

Put off the "rain tax," and we put off direct benefits to the health and well-being of county residents in Manhattan Beach and numerous other neighborhoods. That's not good government. That's not leadership.

Urge your state legislators to stay strong on stormwater fees!

I think the project deserves the money!