Protecting the Brookie & Much More

When it comes to the environment and wildlife, we seem to be drawn to specific places and critters. Some of us are drawn to the ocean; others to the mountains. Similarly, some love watching birds while others are fascinated by turtles. And for many of us, there's no one favorite--we're simply fascinated by all of it.

For whatever reason, one critter that could likely use a little more appreciation is the fish. For me, that appreciation started as a kid. I grew up in the Pocono Mountains, and on any given daily adventure you could find me, my sister, and a few others playing in or near a stream. The water was cool and clear and we thought nothing of drinking a scoopful.

My dad enjoyed fishing and always brought my sister and me. He and a handful of fellas started a rod & gun club and built a fish hatchery on site. I remember the "cribs" teeming, seemingly spilling-over with fish; mostly rainbow and brown trout, along with a few exciting, rogue, palominos. My sister and I would sit on the edge of the cribs for hours just watching them swim. I wouldn't trade these experiences for anything.

My hunch was that most people would say a handful, a half-dozen. And I was right. The average was six. The responses ranged from two to 33, but most people fell into the "handful" category. 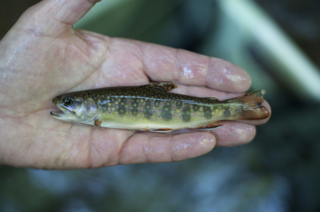 The brook trout, or "brookie," is Pennsylvania's only native trout. Photo by Neil Ever Osborne/iLCP.

One species that nearly everyone can name is the trout, with special interest in our beloved native brook trout. Of the four types of trout found in Pennsylvania streams only the brook trout was here when settlers first arrived.

The brook trout is a fish of legend. To see one, swimming wild, is a rarity. To catch one can be life-changing. The mystique of the brook trout, or the "brookie," makes it the treasure of fresh water fishing.

One of my colleagues is a master naturalist. His love of all things wild is extensive and profound, and he has a remarkable, romantic way of storytelling about everything from trout to moss that transports you.

He, John Page Williams, or "JP" is also an avid fisherman. Fly fishing, fresh water, salt water, you name it. I asked him about the brookie and he started out by saying that he was by no means an expert . . . but I knew better.

He told me that today's brook trout is a descendant of the "Square-Tails." These massive fish were historically found throughout the northeast. These guys had it made. They lived in large rivers of clean, cool waters with plentiful food sources, and consequently, they grew to be massive in size--upwards of 12-pounds.

But as the human population expanded, we developed the land and sent our pollution into the waters, and consequently, changed the river-homes of the square-tail. The waters warmed, the food sources dwindled, and the water was no longer so clean.

Ultimately, that meant some pretty dramatic changes for the fish. And while you might still find a 12-pound square-tail in a few stretches of waters in the northeast, their numbers are few.

Brookies are a much smaller fish. JP tells me that a 12-incher is a prize these days. And because it simply cannot survive pollution or drastic temperature change, its Pennsylvania range includes only a handful of exceptional and high quality watersheds; while its historic range spanned nearly the entire state.

Why does any of this matter? And why did I ask you how many fish you could name? It matters, and I'm asking because living in Pennsylvania's streams, rivers, and lakes right at this moment, there are 160 different species of fish!

Now, I'm not a numbers person. But I'm going to throw out one more that will, I hope, make you stop for a moment to contemplate. Of those 160 species--80 of them--half are endangered, threatened, or have already been wiped-out from Pennsylvania's waters completely.

So what can we do? 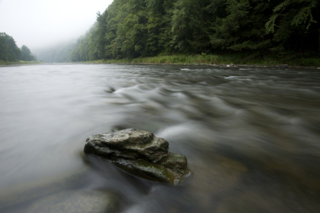 Pennsylvania’s high-quality, special-protection streams are home to brook trout and many other aquatic species. Photo by Neil Ever Osborne/iLCP.

We can start by protecting the brookie and the other 159 species. On April 28, Pennsylvania's House Game & Fisheries Committee is scheduled to review a version of previously introduced legislation, HB1576 or the Threatened and Endangered Species Bill.

The crux of the bill is this: For the past 40 years the scientists at the Pennsylvania Fish & Boat Commission have overseen special protections for the brookie, all fish, reptiles, amphibians, and aquatic invertebrates. Similarly, the Game Commission oversees protections for birds and mammals. And finally, the Department of Conservation and Natural Resources (DCNR) oversees the protection of plants as well as unique ecological and geologic features.

All three protect our wildlife and unique natural spaces from a host of threats including habitat changes and pollution. And they do so by making credible decisions based on scientific study. This Bill proposes to throw a wrench into that process by inserting government-appointed politicians to oversee the scientific decisions of the Fish & Boat and Game Commissions along with DCNR.

Politicians have their expertise. Scientists have theirs. Let's keep it that way, and let our scientists be the ones to make decisions about science.

We'll have more details about this pending legislation, so if you are a CBF action-network member, keep an eye on your inbox. If you're not already an action alert member, you can easily become one.

The author as a child along her father's trout hatchery.

When people ask me what I do, and I tell them that I advocate for clean water, I sometimes get a blank look in response. I then go on to tell them how I grew up drinking scoopfuls of clean stream water and that I want my niece Kate, who is five, to be able to do the same. Her dad now takes her to the trout hatchery that my dad built. The cycle is repeating itself, and that gives me hope.

But ultimately, we have to protect the things that we care about because not everyone cares for the same things. So I hope that even if fish are not your "thing" that you understand the value of clean water and will join CBF in protecting the brookie and the streams where they live.

you are so right . too many people do not care about clean water and they take it for granted that it will always be there. I keep getting out the word to people and hope it sinks in to them. It is so important to have clean water for our feature. I am also against all the drilling which I feel is harming streams