Let's Hear It for the BUBBAs!

The Grand Prize Winner of the BUBBA Awards at the Plum and Walnut Green Intersection in Lancaster, PA.

Last week the Chesapeake Stormwater Network (CSN) named its six finalists, and ultimate grand winner for (drumroll, please!) Best Urban BMP in the Bay Award, or BUBBA for short. These awards represent the most innovative and effective local projects in the region that clean water the old-fashioned way—with vegetation.

The grand prize winner was a public-private project at the major intersection of North Plum and East Walnut Streets in Lancaster City, Pennsylvania. The intersection was prone to both flooding and traffic accidents. The city built four garden-like structures called bio-retention basins on each side of the intersection to soak up flood water and polluted runoff. The basins were planted with native shrubs, perennials, ornamental grasses, and other tree species.

Lancaster Brewing Company, housed in an old brick building on the intersection, also built a cistern to store rainwater from its roof that previously gushed into the intersection. The cistern then releases the water into planters in which the brewery grows its own produce. The brewery's retail operation also used permeable pavement to create a beer garden adjacent to the rain gardens.

The re-engineered intersection also slows the average car's passage through the intersection by 5 m.p.h. So the project soaks up and filters polluted runoff, creates a pleasing garden area and fresh produce for the brewery's retail operation, and calms traffic. Brilliant!

Before man and his domestic animals trampled or paved over the natural world, plants and trees were our natural water filters. Now polluted runoff is the main source of water pollution in many of our cities and suburbs, carrying pet waste, weed killer, and other chemicals directly into local creeks and rivers without being treated in many areas.

The trouble is you can't just build a big treatment plant, like you would for sewage. What we need are thousands of micro-treatment plants strategically located at drainage points around the watershed. That's where bioretention basins and other innovative projects come in. They are like engineered gardens and wetlands.

Of course, an engineered garden is about as exciting to most people as watching grass grow. You certainly won't see headlines in your neighborhood newspaper.

But these projects heal and beautify our scarred landscape. They provide tangible community benefits. The BUBBA awards recognize the best healers. These folks are the doctors of natural drainage. They'll adopt a forlorn and lifeless stream behind a shopping mall, apply medicine, and presto, it's up and gurgling.

I visited one of the finalist projects in Maryland. Previously, it was a barren old farm pond in Davidsonville, Maryland, downstream from animal pens and farm fields. The pond had been the main source of bacterial and sediment pollution to Beard's Creek which drains to the South River. 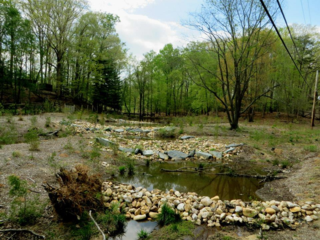 The First Place Winner in the Best Habitat Creation in a BMP category of the BUBBA Awards. Davidsonville, MD.

The folks at South River Federation used human ingenuity to mimic what a beaver would have done to the pond. Cut trees, earthen mounds and rock barriers break up the pond into sections which allow for vegetative growth, and a kind of step-pool filtration system.

"Beavers do a lot of things to floodplains that can improve water quality, especially in a forested setting," said Kirk Mantay, restoration specialist for the South River Federation. "The most obvious is that they construct systems of parallel dams that are perpendicular to an existing flow path, like a ditch, gully, or stream. Unlike human-made dams of clay or concrete, beaver dams are full of holes, so water is detained but not often completely impounded. This detention, even in urban settings, is enough to allow phosphorus laden-sediments to 'fall out' instead of being transported downstream."

The accumulation of leaf litter in the pond also will change the water chemistry, Mantay said. Micro-organisms will move in which process nitrogen and phosphorus in the water and sediment which otherwise would have washed downstream.

Children from area schools did the plantings at the Davidsonville pond, decreasing the cost of the project, but also providing hands-on education and a perfect metaphor for hope. Who better to give new life to an old farm pond than kids in pastel shorts planting native grasses.

Now cleaner water flows off the site into Beard's Creek. Water testing downstream has found dramatically reduced bacteria counts. And solitary sandpipers, mallards, geese, bullfrogs, and other creatures have found a welcome habitat. The project earned first place in the Best Habitat Creation in a BMP category. The project was funded by the South River Federation, the Chesapeake Bay Trust, and Constellation Energy.