Home About Subscribe CBF Blogs Join Us Take Action Donate
Photo of the Week: A Lot of Beauty Along the Way
Angler Clean Water Story: Clean Water Laws Need to Have Teeth

The Dell: Beautifying a Campus, Helping Save the Bay

The Dell on the grounds of the University of Virginia in Charlottesville, Va., is a quiet, green oasis in the middle of a bustling state university. Students, faculty, and visitors are easily drawn to the place by its leafy trees and shrubs, shady walking paths, free-flowing stream, and picture-postcard pond.

You'd never know the Dell was actually designed to be a stormwater retention and treatment facility for reducing runoff pollution in Meadow Creek, the Rivanna and James Rivers, and the Chesapeake Bay. But this bucolic park is proof positive that smart planning and eco-friendly, low-impact design can help achieve clean water goals and beautify landscapes, all while being cost-effective.

The Dell wasn't always so picturesque. A half-century ago, UVA was growing and needed more and newer buildings. University planners decided that Meadow Creek, a small stream running through campus, would better serve the expanding university if it was enclosed in a pipe and put underground, leaving the Dell area level, dry, and more suitable for future buildings and tennis courts. And so it was done. 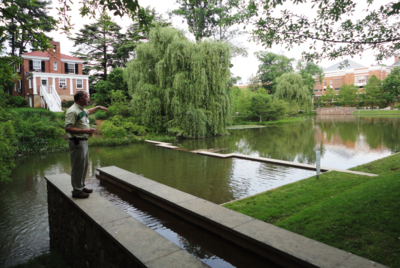 Decades later, however, and moving into the new millennium, the university realized it had a problem. It still needed to build new facilities, including the massive John Paul Jones Arena for basketball and other large indoor events. But university planners also knew they must reduce the volume of water and pollution running off all the new buildings, streets, and parking lots to comply with the university's municipal stormwater permit, state runoff regulations, and Chesapeake Bay pollution reduction goals.

That caused a shift in thinking from building-centric stormwater controls to regional and low-impact approaches, said Jeff Sitler, associate director of environmental resources for the university. Reconfiguring and softening the landscape to allow runoff water to slow down and soak into the ground rather than quickly wash off into concrete gutters and pipes reduces the volume of stormwater runoff. It also helps clean and filter out pollutants--nitrogen, phosphorus, and sediments--causing problems for the Chesapeake Bay and its rivers and streams. 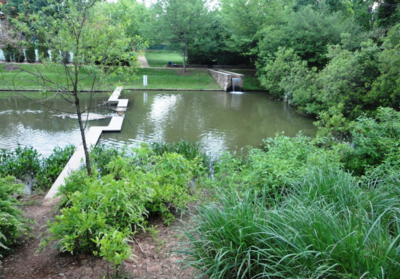 That all led to rethinking the fate of Meadow Creek. The university now realized the creek, for the past half-century buried out of sight in a pipe underground, could better serve the growing university by being unearthed and reborn as a free-flowing stream--a stream with gentle bends and meanders, with artfully designed weirs and forebays to catch and hold big storm overflows, with wide flood plains to allow high water to gently spread and soak into the ground, with bio-filters of native trees, shrubs, and flowers to absorb water and pollution and attract wildlife, with gentle spillways and a placid pond full of fish, turtles, and frogs. And so it was done.

A decade later, the Dell today is a beautiful and busy campus attraction, popular with walkers, joggers, and photographers. It's also doing some heavy lifting to help the university meet federal and state runoff pollution requirements.

According to Sitler, the Dell and associated low-impact features at the John Paul Jones Arena and a nearby parking garage have cut sediment pollution in Meadow Creek more than 95 percent and reduced phosphorus pollution by 90 percent. (Nitrogen reductions have not been as great but generally are low because of the university’s nutrient management plan, Sitler said.)

And all of this for an initial construction cost of $1.5 million and ongoing, routine maintenance expenses, chiefly to periodically clear the pond areas of sediment buildups.

"We wanted the Dell project to produce a blend" of benefits, Sitler says. "We wanted to improve stream flows, improve water quality, reduce the volume of water going downstream, and provide a nice amenity for the university."

Learn more about the University of Virginia's Dell and view before, during, and after photos here.

And check out our Photo Album on Facebook for the grand tour!