Home About Subscribe CBF Blogs Join Us Take Action Donate
Photo of the Week: One Whole Heck of a Lot!
A Weekend Without Water

Could It Happen Here? 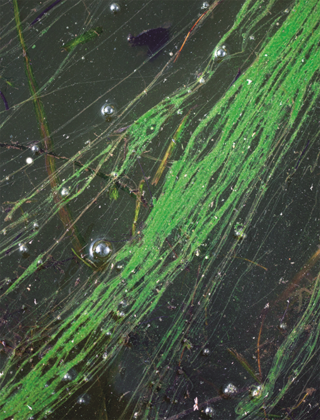 You've no doubt read or heard news accounts about the dangers to human health of a specific blue-green algae in Lake Erie and other areas of the country that last weekend shut down the municipal drinking water supply in Toledo, Ohio. You may be wondering, "Could it happen here?" Unfortunately, the answer is . . . yes.

Here are three things you should know about this troubling situation:

1. The same blue-green algae (technically called a cyanobacteria) that is causing problems in Lake Erie is also found in the Chesapeake region. The toxins produced by these blooms can be harmful to humans and wildlife that come in contact with the water during a bloom. Historically, these blooms have been documented in lakes and other impoundments, and in the tidal freshwater portions of the James River in Virginia and the Potomac River as well as both the the Choptank and Sassafras Rivers in Maryland. In fact, there was a bloom reported July 31 in the Choptank that had cell densities nearly three times what the World Health Organization considers a probable risk to human health. For more information, see CBF's recently reissued 2009 Report, pgs. 8-9, here.

2. The cause of cyanobacteria blooms is the same as the cause of blooms of other types of algae—too much nutrient pollution. Lake Erie and the Chesapeake have similar problems—excessive nutrient pollution from agriculture and urban runoff—and both suffer from algae blooms.

3. Fortunately, in the Chesapeake region, most drinking water supply intake pipes are not in areas that historically experience dangerous blooms. However, some drinking water reservoirs are affected by nutrient pollution, making them potentially vulnerable to algae blooms, including blooms of harmful algae. And some Maryland ponds and lakes have been closed to recreational use this summer because of harmful algae. The take-away is this: We must reduce the risk to human health from blue-green algae and other harmful algal blooms in the Chesapeake Bay region. This can be done by accelerating efforts to reduce nutrient pollution. Agriculture and urban runoff are primary sources of much of the phosphorus and nitrogen pollution causing these blooms. So, it makes sense to focus efforts on reducing these two sources of nutrient pollution.

Here in the Chesapeake region, those efforts are clearly laid out in the Chesapeake Clean Water Blueprint, the federal-state plan to restore the Bay and its rivers and streams. The good news is that it's working. Each of the six Bay states and the District of Columbia—including hard-working farmers, business, and individuals—are working together. We are well on our way to making our rivers and streams safer, improving habitat, and protecting human health. The bad news is that the American Farm Bureau Federation and the Fertilizer Institute have recruited 21 states from across the country to support their efforts to derail Chesapeake Bay restoration.

Yes, what happened in Toledo could happen here. Let's ensure it does not. If we, who live in the Chesapeake region want the safe, clean water we deserve, the Blueprint must be fully implemented.

WAYS YOU CAN HELP: