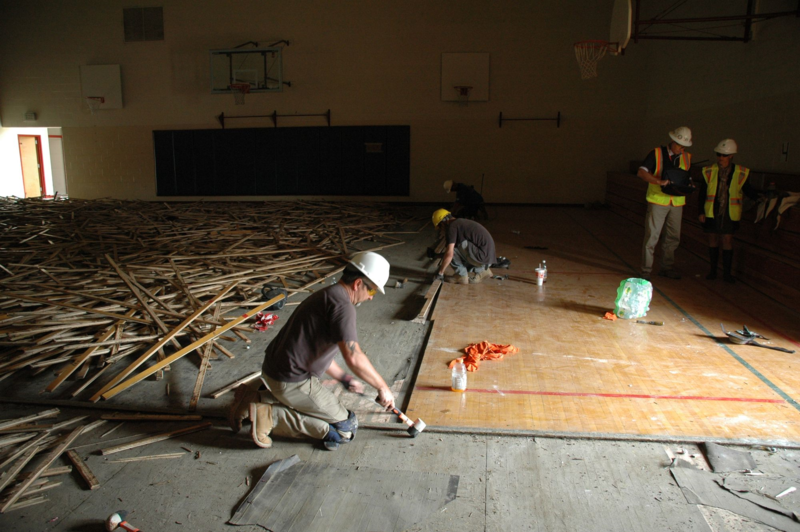 I doubt my CBF colleagues will shoot hoops or jump rope when they move into the new Brock Environmental Center, set to open later this fall in Virginia Beach.

But I wouldn't blame them for wearing sneakers to work and occasionally running through the building like it was, well, a gym. That's because much of the center's flooring is made from planks salvaged from the gymnasium floor of the former Campostella Elementary School in Norfolk. 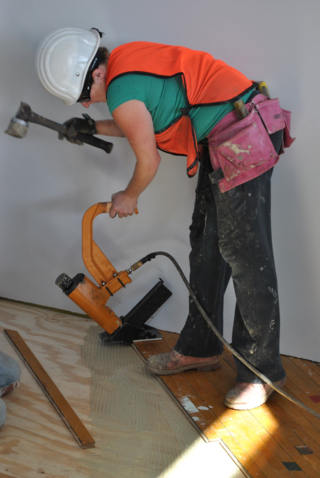 And while the maple hardwood will no longer host basketball and volleyball games, it will make a perfectly beautiful and durable floor for the Brock Center, CBF's new environmental education and community Center overlooking the Lynnhaven River.

But it will also be one of the most energy-efficient, water-conserving, environmentally smart buildings in the world. CBF intends the center to meet the strictest LEED Platinum and Living Building Challenge environmental standards. Among others, those standards include maximizing the use of recycled and reusable materials to save natural resources, energy, and costs.

Enter the old gym floor. When CBF, builder Hourigan Construction, and architect SmithGroupJJR learned that the former elementary school was about to be demolished, they asked Fulton's Finest Flooring of Virginia Beach to salvage the hardwood before the wrecking ball arrived and take it to the Brock Center construction site.

"We were under the gun to get it before the school was demolished," says Amanda Fulton, owner of Fulton's Finest Flooring. "We got in there, salvaged the floor, and got out in a week."

Ripping up, then re-installing an old gym floor was a first for the company, and a bit of a hassle, Fulton acknowledged recently as she and a crew carefully sawed, glued, and nailed the 1.5-inch planks into the Brock Center. In fact, plenty of work on the floor still lay ahead. After the planks are installed, they must be left a few weeks to acclimate to the new building's air and humidity. They then must be sanded to remove old paint and gym markings, stained, and sealed with an environmentally friendly coating.

Still, Fulton said she'd do it all again, "for all the right reasons."

"One day my daughter will go on a Chesapeake Bay Foundation field trip here and learn about energy conservation and water conservation. I love this building."

There's still time to be a part of what will be the greenest building in Virginia and an international model for sustainable building! Click here to learn more.