Barrels by the Bay 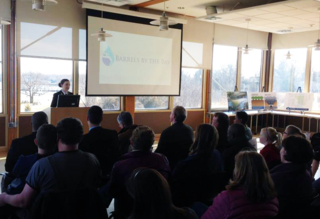 In 2004, my family and I were sitting at the dinner table discussing the never-ending rain from Hurricane Ivan. I took 10 steps "just to check" the basement with my dad and the water began soaking into my shoes a little more with each step. In a matter of hours, my community was flooded because of the immense amount of rain filling the streets.

Years later, I first learned about rain barrels while painting one at a local environmental fair. I remember my excitement when I cut the downspout and installed my own rain barrel at my home in Natrona Heights, Pennsylvania. I even made it my first science project and spent hours in the backyard after school. In 2011, I was honored by President Obama to accept the President's Environmental Youth Award at the White House Summit on environmental education for the hydroelectric rain barrel science project that I built in my backyard. 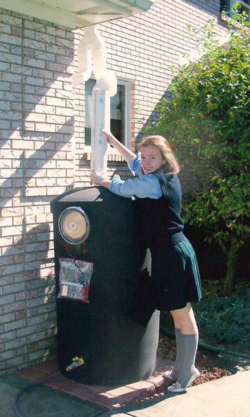 When I started at the Naval Academy I experienced similar weather to my hometown—the fall and spring were full of rainy days. But, what I wasn't prepared for was flooded sidewalks and streets, sitting water that that had a film of contaminants suspended on top, and people unaware of how a rain barrel could change all of this. This past October, I was trudging through sidewalks in Annapolis and started thinking that maybe there was something I could do.

The Chesapeake Bay is the largest estuary in the United States. It has more miles of shoreline than the entire west coast, encompassing six states and D.C. But what you can't see on a map is that this watershed, which is home to 17 million people, has many streams and rivers on EPA's dirty waters list.

I truly believe Barrels by the Bay can change this. On March 23, I launched Barrels by the Bay at CBF's Philip Merrill Environmental Center. I established the non-profit to bring awareness to World Water Day and water resources. Together with students from 13 different schools, we are painting 22 converted Coca-Cola syrup barrels to reflect one of the past 22 World Water Day themes. We will then donate these rain barrels to public buildings around Annapolis to help collect rain water and prevent polluted runoff from running into our local rivers and streams.

Nearly a thousand students are involved in the painting of these barrels, and they are also learning about preserving water resources in the process through weekly curriculum prepared by the EPA. After the barrels are installed, 34,000 residents and 4.5 million visitors to Annapolis each year will see these barrels before walking into county buildings, senior centers, or even the Naval Academy gates. Students paint rain barrels at the Barrels by the Bay kick-off.

Barrels by the Bay will increase community awareness and improve the sustainability of Annapolis buildings. To combat the flooding and polluted runoff concerns, 631,400 gallons of potentially contaminated water will be collected with the 22 rain barrels.

In the coming months, I plan to expand this effort throughout Maryland to educate more students and individuals about the environment and the importance of restoring the Chesapeake. Two years from now, I hope for Annapolis streets free from contaminated runoff because there will be less water flowing off the streets.

There is so much we can do to educate individuals about the environment and to work together to solving polluted runoff problems. I am proud to share that Barrels by the Bay is doing just that.