Atlantic menhaden, those small, silvery fish that travel in large schools up and down the Atlantic Coast and Chesapeake Bay, may be swimming into trouble.

The Atlantic States Marine Fisheries Commission (ASMFC) is meeting in Alexandria, Va., tomorrow and is considering raising the harvest quota for menhaden. That would allow even more of these boney little fish to be caught by commercial fishermen, who now remove approximately 80,000 tons of menhaden from Virginia waters each year.

And that has the Chesapeake Bay Foundation, The Pew Charitable Trusts, and thousands of conservationists and recreational anglers worried. Why?

Menhaden are the meat and potatoes of the marine world. As filter feeders of plankton, menhaden are packed with nutritional value and are food for striped bass (rockfish), bluefish, summer flounder, and other fish, marine mammals, osprey, eagles, and sea birds. In fact, menhaden are so critical in the marine food chain that they've been dubbed "the most important fish in the sea."

People love them, too, although not to eat. American Indians once used menhaden as fertilizer for corn. Early Colonial settlers processed them for lamp oil. In the late 19th century, the harvest peaked as menhaden oil replaced whale oil for lighting. But then the menhaden population began to collapse.

In the past century, all but one state gradually banned the large-scale fishing of this important fish; today, only Virginia allows "reduction" (industrial) menhaden fishing, which takes about 80 percent of the catch coast-wide. The oil and fish meal from the catch goes into paints, cosmetics, diet supplements, and animal feeds. The other 20 percent of the annual menhaden harvest is used as bait for blue crabs, lobster, and for recreational fishing. 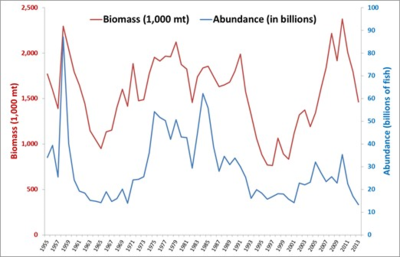 Meantime, menhaden numbers have continued to decline. While the latest scientific assessment of the population shows the "biomass" (the total weight of the fish stock) at a reasonable level, it also found that the total number of menhaden remains at historic lows.

Concern about the long-term health of the menhaden population prompted the ASMFC, which manages the coast-wide catch, to reduce the commercial harvest by 20 percent in 2013. The move was widely seen as a prudent first step in restoring menhaden numbers to more sustainable levels.

"Although CBF is encouraged by the recent stock assessment, the results are actually mixed. While the total biomass is at an acceptable level, the overall menhaden abundance is at levels lower than when the fishery was declared overfished in the 1960s. And numbers of prey fish are what matters to predators like rockfish and ospreys.”

Moore also points out that the recent stock analysis is a "single-species assessment" and does not fully account for menhaden's ecological value as an important forage fish that other marine creatures depend upon for food.

"There is still important work to be done by ASMFC to ensure menhaden can fulfill their critical role in the coastal and Chesapeake Bay food web. CBF strongly recommends that ASMFC take no action to increase harvest quotas until ecological reference points are adopted or other measures taken that ensure menhaden’s ecological role is safeguarded."

CBF is monitoring the ASMFC meeting this week and will report actions taken, so stay tuned.