Home About Subscribe CBF Blogs Join Us Take Action Donate
Trees: The Cool Solution to Water Pollution
This Week in the Watershed 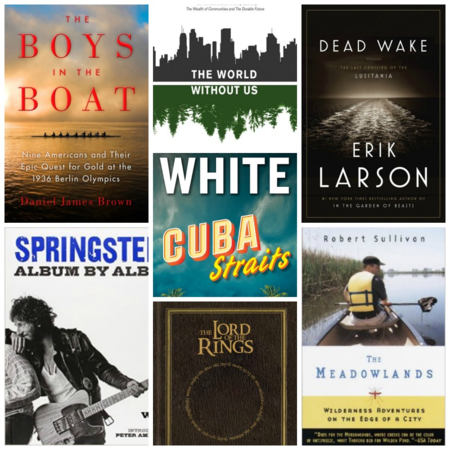 "Summer afternoon—summer afternoon; to me those have always been the two most beautiful words in the English language." —Henry James

We tend to agree with James—summer is one of our favorite seasons, too. Often synonymous with blue crab feasts or long twilight swims, summer also means grabbing a good book and a patch of shade and digging into an extraordinary story.

So we asked some avid CBF readers what some of their favorite summertime books are—whether they be adventure stories, riveting histories, or learning everything you ever wanted to know about "The Boss" (yes, that's a thing). Here's what they had to say:

Will Baker, CBF President: "My current book is Dead Wake, The Last Crossing of the Lusitania [by Erik Larson]. I am reading it because my friend Preston White sent it to me! I love boats and the water, and this book is all about both. It is also about decision making and leadership, with both positive and tragically negative results. And it provides an insight into WWI which I had not had. A good read!"

Jennifer Herzog, Maryland Grassroots Manager: "The Lord of the Rings, by J.R.R. Tolkien. I will always come back to these books, since I love a good epic, and this one defines the genre. I also think The Lord of the Rings has helped define what I believe is possible, and why I believe saving the Bay is an achievable quest. We don't have giant spiders, ringwraiths, or the Eye of Sauron to defeat—we just have to deal with all this pollution! Yes, I know the books are fantasy, but it's the human (or hobbit?) condition to quest and struggle, and sometimes to conquer the odds. When that happens—in fiction and in life—I will always be cheering in the front row."

Dave Slater, Senior Campaign Director: "The Meadowlands, by Robert Sullivan. Because I grew up next to this once-rich swamp, Sullivan's short book from 1998 holds particular poignancy for me. But for any reader, it should serve as a cautionary tale about the fragility of nature, wrapped in a clever adventure story."

Katharene Snavely, Vice President, Development: "I spent my weekend boating the Bay and reading Springsteen: Album by Album by Ryan White because who doesn't love Bruce? This book is a great retrospective on Springsteen's 40-year, prolific music career. It provides insight into Bruce as he and his music evolve from album to album with his message often reflecting the struggles and triumphs in America from decade to decade."

Tom Ackerman, Vice President, Education: "The World Without Us, by Alan Weismann. A wild thought experiment—what would happen to the planet if humans disappeared tomorrow? It explores the ways we have changed the planet in long-lasting, far-reaching ways, and the surprising speed with which nature could rebound if human influence were removed."

Bill Goldsborough, Director of Fisheries: "Currently at the top of my reading list is Cuba Straits, the latest in the Doc Ford series by Randy Wayne White. Doc is a marine biologist in southwest Florida with a black ops past. He spends his time collecting and studying marine life until he and his hippie sidekick get dragged into various adventures doing good and confronting bad."

John Page Williams, Senior Naturalist: "I'm heading into the stretch turn in The Boys in the Boat: Nine Americans and Their Epic Quest for Gold at the 1936 Berlin Olympics by Daniel James Brown. It's a painstakingly researched and well-told tale of the young loggers and watermen who made rowing history as members of the University of Washington Huskies varsity crew in the mid-30s. Over several years, they came together as a team to defeat all comers—especially the German crew—at the 1936 Olympics in Hitler's Germany. And yes, as we watch competitive rowers all over the Chesapeake work out on our waters in their narrow, low-slung shells, we strive to achieve the Chesapeake Clean Water Blueprint to ensure that the waves and spray they encounter are healthy."

Special Note: A portion of the purchases made through the above dedicated Amazon links will go toward saving the Bay. So get out there and get reading!