Home About Subscribe CBF Blogs Join Us Take Action Donate
Photo of the Week: Sailing the Bay
This Week in the Watershed

Restoring the River of My Childhood 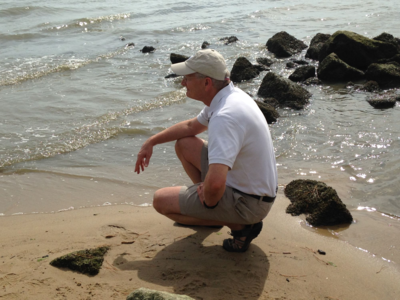 I grew up in Newport News, Virginia, in a home on the James River near the mouth of the Chesapeake Bay. I learned how to swim in the river, how to row a dinghy, how to fish and crab, how to read the wind and waves, and how to lose myself in the river's daily ebb and flow.

And like all kids, I knew every inch of my neighborhood. I knew every beach, pier, jetty, and seawall. I knew exactly where to wade to find soft crabs at low tide, on which rocks and pilings to net hard crabs at high tide, and under which Childhoof sunken logs lay fierce-looking (and biting) oyster toad fish. The river was truly a wonderland of life—clear water and vast underwater grass beds full of crabs, fish, oysters, mussels, and clams. In the fall, dozens of white deadrise workboats hovered offshore harvesting oysters. And during the winter, the river was black with waterfowl; on still nights the air was filled with their quacks and whistles.

It was an idyllic youth, a Huck Finn-Tom Sawyer childhood, and the James River was its focus and heart.

But as I became a teenager, the river changed. The water grew persistently muddy, making it impossible to see crabs and fish beneath the surface. Sandy beaches eroded away to rock and clay. The grass beds full of life disappeared. Tar balls and litter washed ashore. And the wintertime flocks of ducks thinned to just a few birds. The James River seemed to be fading with my youth, and while I had no clue why, I distinctly remember wishing it wasn't so but feeling helpless to stop it.

Eventually I concluded the changing river was just another difficult part of growing up, of letting go of childhood, of accepting those unfortunate realities of teen life like report cards, gangly bodies, and broken hearts. The older I got, the farther the James River of my youth receded into memory. Then it was off to college, adulthood, relocations, jobs, marriage, and family. I never solved the mystery of the river. I thought I never would.

Fast-forward 25 years and an 18-year career with CBF. There I learned about nitrogen, phosphorus, and sediment pollution, about excess fertilizer and manure, about wastewater, about sprawl development and urban runoff, about lost wetlands and forests, and about cloudy water and dead zones. And I learned that the health of the Chesapeake Bay had been declining for centuries, finally bottoming out in the 1960s—just about the time I noticed the James River begin to die.

And then it hit me. What was killing the Chesapeake Bay was the same thing that was killing the James River: too much pollution. I was thunderstruck. At last, a riddle that had frustrated me for decades was solved. Even more significantly, CBF was demonstrating every day that the James and Chesapeake were fixable. There was nothing absolute or immutable about pollution. It is caused by man; it can be stopped by man.

But most profoundly, CBF allowed me to be a part of the team working to ensure the Bay and the James River will be restored, so that one day another kid growing up beside another river can discover its wonders.

Learn how we are working to restore the James and other rivers of the Bay through the Chesapeake Clean Water Blueprint.

Kudos to my friend Charlie Epes who can put in words how much we all love the James River and Chesapeake Bay. I thank him for working on restoring the beauty of both bodies of water and preventing such waste from damaging other waters for the enjoyment of future generations.

I was raised by the James River too. I still live by the river. I live in a small apartment complex, called River Akers, which was started by my father, Kenny Akers. He had a pier here first, River Drive Beach. He rented out boats, sold bait, any fishing supplies, and the quanson hut, was a snack bar. My siblings and I were here every summer, until Daddy decided to build apartments, for a more steady income. Daddy is gone, but the Akers family still owns the property here, and live here. This place breathes Daddy. ❤️
I remember the river as a child, swimming in it, fishing, we all loved the Rivah☺️ It is heartbreaking to see how, it has changed. I want to help, revive, the river any way I can, so that my daughter can enjoy the James as I did.
Olga "Ken" Akers

I too was raised on the James River. Dad and Mom bought on the James thinking that if we had the river to play in never needed to go anywhere else for summer vacations. They were right. Mom is 99 1/2 now she loved to go soft crabbing. She would cook then for us she didn't eat them. We loved swimming and boating on the river. Sleeping with the windows opened at night so we could feel the breeze. It was a wonderful childhood. Would love to see the rive clean again.
I remember when the tide would get so low that we could run all over the place. Can't do that now.
Myra Mays

I grew up right across from the James right near my beloved first grade teacher, Mrs Epes' house. Sadly, we never got to swim or crab as much as we told it was toxic with Keapone (sp). This was in the early 70's.
Thank you for fighting for fighting such a special place. I am land-locked now and so miss those beautiful sunsets over the James.
Sarah Wible Watt

Sarah,
This is Susan Dixon Reagan. I agree with all you say and remember those days as well. My husband and I live in Hilton blocks down from your home.
Susan.