Home About Subscribe CBF Blogs Join Us Take Action Donate
This Week in the Watershed
Photo of the Week: The Bay Wins

Addicted to Making a Difference 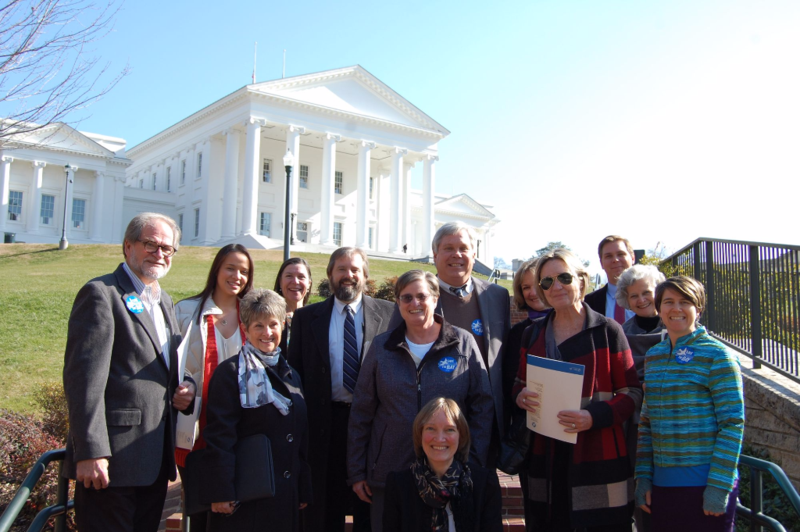 CBF volunteer Kit Johnston (second from right in the middle row of photo above) has lobbied for clean water with CBF as well as for a host of other causes. After taking part in CBF's Lobby Day in Richmond last week, Kit reflects on how one person really can make a difference by meeting with their elected officials.

Taking time to lobby for issues you believe in during the Virginia General Assembly's short annual session can become a bit addictive. It's intense . . . and empowering. I first got hooked when I linked up with a coalition of environmental and local groups, not including CBF, to lobby our state legislators not to lift the uranium mining ban in Virginia. And we won, with a little help from the National Academy of Sciences and senators and delegates willing to listen.

You may think that your senator and delegate really don't want to hear from you. Or that you will be at a loss for words. You may even assume that the General Assembly dice is loaded against us on funding issues so important to our Bay such as stormwater control. But the fact is, your delegation does want to hear from you. You are a constituent after all. And they really want to know what you have to say. They get tired of hearing from professionals who may have neither your conviction nor the greater public interest in mind. But sometimes they find that folks like you and me have a personal take on the issue at hand that they hadn't considered before.

Thanks to CBF's Lobby Day this year, I met my new delegate, Nicholas Freitas, for the first time. He turned out to be someone who listens. And someone who seemed to relate to the fact that so many of the farmers in his district will be stuck if this General Assembly doesn't pass additional funding for agricultural practices such as stream exclusion aimed at cleaning upstream waters that feed the Bay.

As far as I'm concerned, clean water is a right, not a privilege. Every impairment or threat to clean water in Virginia is a threat to public health, safety, welfare, and even national security.

Learn more about our legislative priorities this year in Virginia.