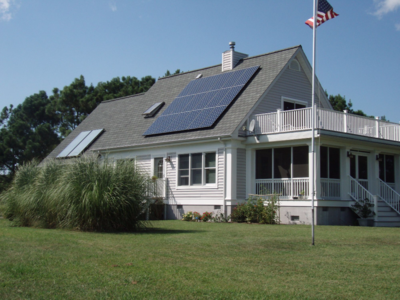 In the small bayside town of Harborton, Sue and Bill Mastyl's home stands as a reminder that green home features are not only good for the environment, but also good for your wallet. For example, when they installed a solar power system and new hot water heater in 2009 they got back a whopping 50 percent of the cost through a combination of federal and state tax credits. They also got tax credits when they installed a new geothermal heat pump a few years ago.

Running energy-efficient systems that rely mainly on solar power, the couple's electricity bill adds up to only about eight dollars in an average month. When you factor in the quarterly renewable energy credits they get, by the end of the year they sometimes even end up making money!

"People think that things like solar and geothermal can only be done when you build new, so I'm constantly trying to reinforce that they can be added very easily to any type of building, as long as you have the right location," says Sue Mastyl. "I also try to emphasize that low-hanging fruit like energy-efficient windows, weather stripping, insulation, energy-efficient appliances, turning down the thermostat, remembering to turn off the lights when you leave a room—all of this can have a huge impact."

Home improvement tax credits are available for all types of projects, from boosting insulation to adding high-efficiency heating and cooling equipment. It's worth checking out if a renovation qualifies next time you undertake projects around the house.

In addition to these credits, "energy-efficient mortgages" let homeowners borrow money for improvements. These loans can cover more pricey upgrades that otherwise might not be affordable, like installing double-pane windows or HVAC upgrades. Since heating and cooling accounts for more than half of the energy used in the average American home, these investments will help you stay comfortable and save money in the long run.

Janet and Haydon Rochester never thought their 1907 Onancock home would be the focus of so much local buzz when they started renovations a year ago. Their traditional Eastern Shore house is in the process of undergoing a complete renewal with an emphasis on energy-saving upgrades.

While from the exterior the Rochester place looks like a traditional Eastern Shore house, numerous subtle upgrades have made the dwelling much more energy efficient. Many are simple improvements that have made a big difference in cutting down on heating and cooling costs. Windows are all double glazed and coated to reject heat, while the roof is a highly reflective material that keeps the house cooler during the summer. Beefed up insulation, along with aggressively sealing and caulking all cracks, has also made a big dent in energy loss. Low water toilets and shower heads add up to savings in the water bill. Interestingly, these renovations have actually enhanced the traditional character of an older home.

Of course, there are plenty of other benefits to undertaking energy-efficient upgrades. First and foremost, they lead to cleaner air and water for all of us. Using less energy at home often means burning less gas, coal, or oil. Burning those fossil fuels produces pollution that not only contaminates the air, but as a result of rain storms also ends up in local rivers, creeks, and the Chesapeake Bay. Cutting down on energy usage can mean a reduction of nitrogen oxides in our air, which are a significant source of nitrogen entering the Chesapeake.

So by undertaking these upgrades you both help improve the environment and support the Chesapeake Clean Water Blueprint, the plan in place to clean up the Bay.

The greening of towns up and down the Shore now has a new meaning—people are increasingly integrating green-building design elements into their homes and recognizing their personal impact on our environment.