Home About Subscribe CBF Blogs Join Us Take Action Donate
What Did You Do on Your Spring Break?
Osprey Nick Has Discovered Tinder

Moving Day for the Osprey 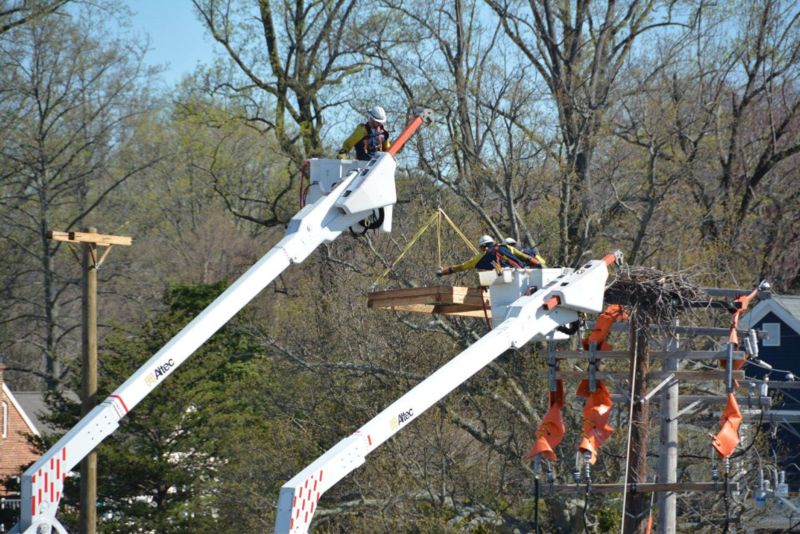 BGE works to safely move an osprey nest to a new platform away from a live electrical pole. Photo by Rob Beach/CBF Staff.

"I just love their sound," says BGE's Principal Environmental Scientist Gregory Kappler on a bluebird kind of day earlier this week. He's talking about ospreys just as one swoops majestically down toward the water in front of us. We're standing on CBF's Merrill Center beach while Kappler's BGE colleagues steadily work nearby to install a new osprey platform. 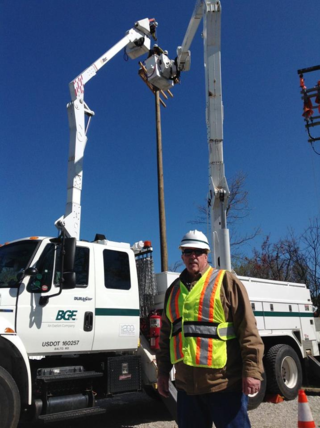 "[We're working to] proactively prevent outages, protect the birds, and protect the nests," says BGE's Richard Yost. "It's a win-win." As such, just this month BGE launched its new Osprey Watch initiative to encourage customers to report any osprey nests near or on utility equipment. The utility company will then dispatch crews to safely relocate the nests and birds whenever, wherever possible.

But though this year is a first for the Osprey Watch program, this type of osprey work is hardly new to BGE. "The first nest that we relocated was down in Baltimore County in 1989," says Kappler. "We've been doing this for many years, trying to keep the birds safe."

In less than an hour, BGE had safely and efficiently moved the osprey nest to a new platform away from the live wires. "[There's the] very real concern that a pole-top fire would occur there. Then you'd lose the birds, the eggs, the young, and electrical service . . . and we don't want any of that to happen," says Kappler who's been with BGE for 37 years.

Just 30 minutes after BGE had packed up and left, the osprey that had been living on the electric pole, glided into its new, fancy digs as if it had been there forever. A welcome sight for all, including Kappler: "It's to the birds' benefit, and BGE's benefit if we can get that nest off that cross-arm, make it safe and, at the same time, give the birds a place to raise their young."

While here, BGE was kind enough to help us with another osprey platform where we've set up our very first osprey web cam! Take a look now.

If you see an osprey nest on BGE equipment, please contact the Osprey Watch program at ospreywatch@bge.com with photos and the pole number or address if possible.

Click here for more photos of moving day for the osprey. 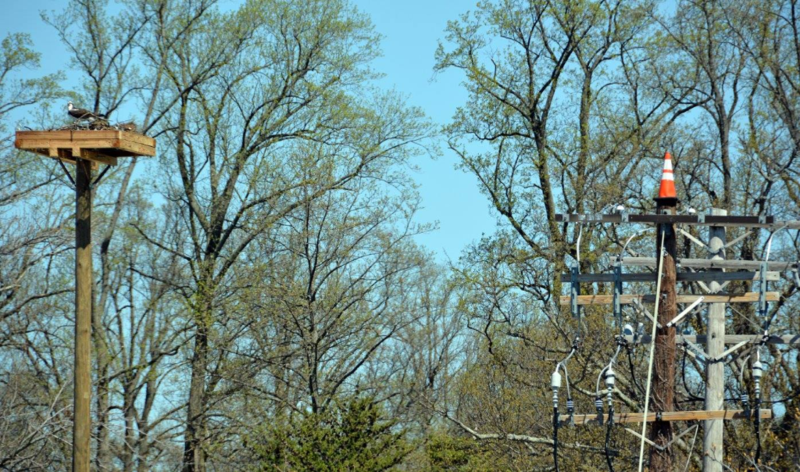 The osprey (left) in his new digs. Photo by Rob Beach/CBF Staff.