What Did You Do on Your Spring Break?

An unusual group of laborers could be seen bending and lifting in the distance on Paul Quick's farm in Union Bridge, Maryland. They were students from the University of Virginia, doing community service earlier this month as part of an Alternative Spring Break program.

While many of their classmates were still sleeping in, these 10 UVA students were working up a sweat as the sun rose and delivered unseasonably warm temperatures.

Each year at this time an inspired slice of students from many colleges commit to spending their spring break helping in the community in various ways. The UVA students volunteered with the Chesapeake Bay Foundation, where they worked at the organization's Oyster Restoration Center and Clagett Farm for several days, and then one day to help Quick on his farm. 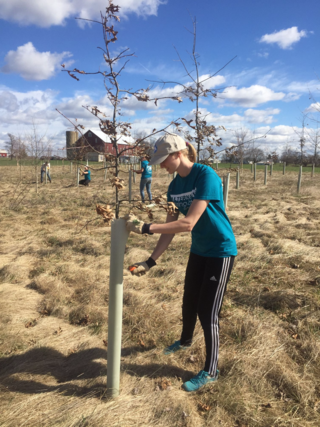 Quick decided several years ago to put his farm in a conservation easement, to honor his father-in-law's wishes that the old dairy farm not be developed. As part of the arrangement, Quick used federal funding to get 20 acres of trees planted along streams on the property. The trees help buffer the stream from possible polluted runoff from the corn and soy crops.

Those trees have now matured. The students' job was to cut off plastic sleeves called "shelters" that had protected the young trees from hungry deer. With about 7,300 trees needing this attention, it was a day of hard labor for students who may be more accustomed to a library or classroom.

The labor was equally strenuous earlier in the week at CBF's Oyster Restoration Center in Shady Side, Maryland, where the students cleaned debris off old oyster shells before planting them in restoration efforts. Those shells, which will be used to grow oyster reefs in the Chesapeake Bay, are heavy. The students had to use a simple device to lift a pallet full of shells above their heads and "shake" the pallet. It was hard work.

But the students said this was the way they preferred to spend their vacation: "It's worth it, but boy, it was a lot of work," said Maggie Daly, a Third-Year biochemistry student from Yorktown, Virginia.

"My shoulders will be sore tomorrow," said Sarah Overton, a First-Year student from Herndon, Virginia.

Daly said she considers herself "environmentally conscious" but wanted to put that ethic to work in the field so to speak. Overton said she felt the same, and also saw the program as a way to see another part of the region. She had always wanted to visit Annapolis, for instance.

Another student, Conner Roessler, a Fourth-Year from Midlothian, Virginia, was doing the program for the second year in a row.

For his part, farm owner Quick said he was glad for the help. He said the conservation easement required him to plant some trees to help buffer his farm streams, but he decided to plant far more.

The trees not only will help keep the streams clean, they also will provide habitat for deer and other wildlife which Quick enjoys.

Rob Schnabel, a CBF restoration scientist who worked with the students, said trees not only help prevent pollution and stream erosion, but also help cool the stream so trout and other aquatic life are more apt to survive. Unfortunately, Maryland is far behind in its goal to get the banks of farm streams planted with trees, he said.

Check out more photos of these inspiring students in the field.