APRIL FOOLS!!! Yes, Tinder is one of the world's most popular dating apps, but ospreys have yet to discover it—as far as we know. We had you fooled there for a minute, didn't we?

In fact, these romantic birds are not all that into awkward first dates and talking too much about themselves. Instead, ospreys mate for life, returning to the same nests year after year, where they reunite with their mate (after wintering apart), breed, and fish for menhaden and other prey using their expert angling skills.

As true with many committed relationships, ospreys develop a strong partnership as they build their "home" or nest together. After the females lay eggs (which they incubate for one to two months), the devoted parents stick together and feed and care for the nestlings for 40-55 days after hatching until they learn to fly. See below for more specifics on the ospreys' appearance, habitat, and food.

While osprey Nick has not joined Tinder (yet), he has just arrived back in the Chesapeake area after flying thousands of miles from his winter home in Ciénaga Mogua, Colombia. Click here to see his full migration path.

Often called the "osprey garden," the Chesapeake Bay has the most concentrated population of osprey in the world with more than 2,000 nesting pairs. Learn more about these extraordinary birds on our blog, podcast, and website. And keep your eye on our brand new osprey web cams as these fantastic birds continue to return to the Chesapeake.

Appearance
With its majestic wingspan of five to six feet, the osprey is often confused with the bald eagle. The large, brownish-black raptor has a mostly white head and underparts, with a distinctive black stripe running across both eyes. It typically grows to between 21-24 inches in length and 2.5-4.5 pounds in weight. The female has a “necklace” of sorts with brown-tipped breast feathers. 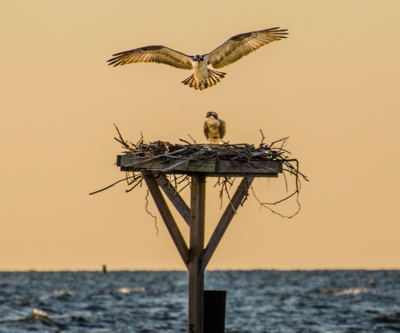 Habitat
The osprey lives near ponds, rivers, lakes, and coastal waterways around the world. It builds its nest usually in dead or open-topped trees or on manmade structures such as utility poles, pilings, and channel markers on or within a few miles of water.

Within the Chesapeake watershed, the osprey can be found throughout the tidal region of the Bay and its rivers from early March through spring and summer. Starting in mid-August, the osprey migrates south.

Food
Feeding almost exclusively on medium-sized fish, the osprey is a superb hunter. From 30 to 120(!) feet in the air, it can spot its prey, dive down to the water (sometimes becoming completely submerged in the process), and pluck its dinner between its curled claws. Once in the air, the osprey will situate the squirming fish headfirst to lessen wind resistance.