Home About Subscribe CBF Blogs Join Us Take Action Donate
Trees, Pollution, and an Arbor Day Planting
This Week in the Watershed

The Good, the Bad, and the Ugly of Summertime Fishing 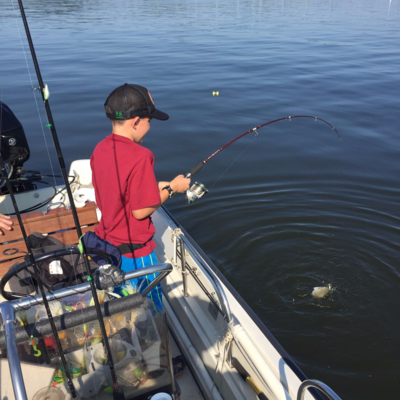 "How will I know when a fish bites?" "Young Sam" asked his grandfather, Sam Locklear. Both Sams and younger brother, Nate, were fishing the Severn River with me last summer. It's always a treat to have enthusiastic ten- and seven-year-old anglers aboard, especially when a trip starts like this one. The words were hardly out in the air before two chunky white perch climbed onto the teasers on Young Sam's line, nearly taking the rod out of his hands.

We were fishing a 12-14-foot-deep restoration oyster reef near the U.S. Naval Academy. This particular reef, an underwater point jutting out into the channel, is an example of where oysters thrive. The reef is elevated in the water column where currents bring the oysters food, carry away waste, and attract other critters—like worms, barnacles, grass shrimp, and mud crabs—that in turn attract predators like white perch and rockfish. We could see the perch on my skiff's fishfinder. The Severn has more successful restoration reefs like this one—they form the happy side of this story.

The other side isn't as pretty. With supper on ice, the Sams, Nate, and I went upriver to a 25-foot-deep reef that showed hard bottom but no fish. It's a survey site for an upcoming restoration project, so we got out an electronic temperature/salinity/oxygen meter and lowered its sensor's ten-meter cable to get a profile of the water column. As usual for summer here—and in too many other parts of the Chesapeake system—the dissolved oxygen measured below two milligrams per liter from the bottom up to about 15 feet. That's a lethal level for perch and rockfish and stressful even for crabs. In fact, on the bottom that day, the level was below 0.5 mg/l—low enough to kill worms. No wonder the fishfinder screen was blank below 15 feet. That's what a "dead zone" looks like. This is the ugly side of the story. It illustrates why we concentrate oyster restoration in shallower water.

As Memorial Day approaches, we've got dead zones on our minds. But why do dead zones form each summer? From human-caused nitrogen pollution. Take a look at this excellent graphic from YSI, Inc. (the maker of my oxygen meter). It concentrates on the Gulf of Mexico, but the global map shows hypoxia ("the environmental phenomenon where the concentration of dissolved oxygen in the water column decreases to a level that can no longer support living aquatic organisms") all over the Earth, including the Chesapeake.

What can we do about it? We have a plan called the Chesapeake Clean Water Blueprint, and it's slowly turning the bad stuff around while we celebrate successes like these new oyster reefs. Want to make sure that Young Sam, Nate, and thousands of other youngsters have a healthy Bay to grow up around? Click here to find out how you can help.