Home About Subscribe CBF Blogs Join Us Take Action Donate
Photo of the Week: It Wasn't Until . . .
Life on the Chickahominy

6,000 Virginians Giving Back to the Bay 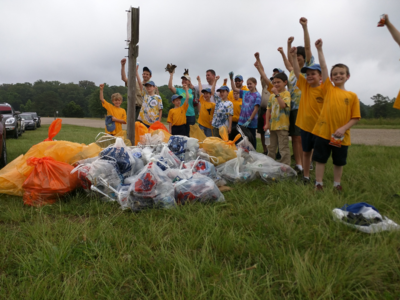 Saturday June 4 marked the 28th Annual Clean the Bay Day, a yearly seismic eruption of volunteers, all descending on waterways throughout the Commonwealth of Virginia to give a little back. And all those small individual efforts had a massive cumulative effect once again.

As CBF's single largest annual clean-up event—and one of the largest volunteer programs in Virginia—Clean the Bay Day brought several thousand people together to clean up harmful debris and litter from hundreds of miles of streams and shoreline in just three short hours!

In the birthplace of the program, all seven cities of the Hampton Roads area were absolutely overflowing with volunteers. The Navy had a precedent-setting turnout and even ran out of places to clean! Every state park in the Chesapeake watershed in Virginia (22 total) fielded clean-up teams. Our clean-up sites in Richmond and Charlottesville specifically saw a tremendous spike in volunteers this year. And we had our first bilingual "Día de la Bahía" clean-up event, which attracted more than 50 volunteers from the Richmond-area Latino community. Clean the Bay Day also helped kick off the very first #ChesapeakeBay Awareness Week, which continues through June 12. The enormity of this event never ceases to amaze.

Numbers are still rolling in, but here are the impressive stats that we've tallied thus far from the day's events:

carts, ghost crab pots, and construction debris were a big part of the overall yield. Volunteers were also surprised by many strange finds including a lottery ticket station, a crock pot, a jet ski, a complete car transmission and an axle, multiple mattresses, a teddy bear with Mardi Gras beads, an enormous stuffed bear, a headless G.I. Joe doll, a taxidermy deer head, a screen door, a smart phone, a walkie-talkie, and two kitchen sinks.

Since 1989, Clean the Bay Day has engaged approximately 146,000 volunteers who have removed more than 6.4 million pounds of debris from more than 6,900 miles of shoreline.

Check out more photos from the day in our Facebook Photo Album.