Baltimore by the Numbers

Planting 111,000 water-filtering oysters in Baltimore Harbor sure does get us excited! Photo courtesy of Terry Cummings/CBF Staff.

The water was a thick mahogany brown as we loaded 20,000 juvenile oysters onto CBF's workboat the Snow Goose for a trip to the Fort Carroll oyster sanctuary reef, their soon-to-be permanent home 18 feet below on the Patapsco River bottom just below the Key Bridge. 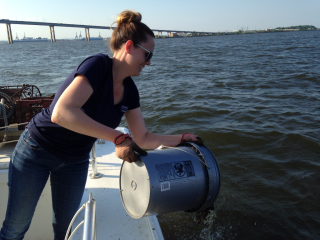 The trip was one of six to the reef to plant the oysters, which were grown from tiny baby spat to quarter-sized juveniles in cages hung from docks around Baltimore's Inner Harbor. Two years ago, CBF and the Waterfront Partnership established the Great Baltimore Oyster Partnership to bring more notoriety to this most critical bivalve, which is at historic lows, and engage Baltimoreans in raising them. Last year we planted about 80,000 oysters at Fort Carroll. In 2016, 150 oyster gardeners raised 111,000 oysters in 10 locations from Canton to Locust Point. When they grow to adults in two years, those oysters will filter more than 5,500,000 gallons of water a day, helping to improve water quality while creating acres of valuable fish habitat. 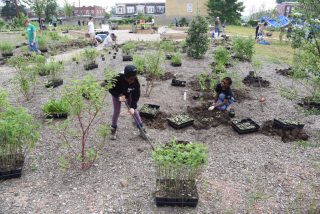 Turning a vacant lot into a community garden in West Baltimore. Photo by Jay Fleming.

Ten days later, across town, 45 volunteers helped plant 3,000 coneflowers, black-eyed-susans, white aster, and goldenrod on a renovated vacant lot. CBF and 11 partner organizations replaced 10,000 square feet of concrete and asphalt with tons of new topsoil, almost two dozen trees, 50 native shrubs and the 3,000 perennials to help reduce polluted runoff by 242,000 gallons a year. This planting culminated the 18-month project and set the stage for more restoration work by engendering the Westside Collaborative, a partnership to improve neighborhoods and the green infrastructure in West Baltimore. 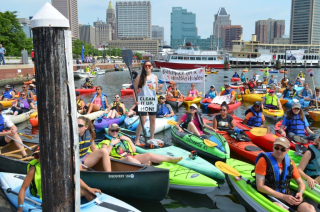 Downstream from the lot the following weekend, a host of paddlers gathered at Canton Waterfront Park for the 2.5-mile paddle to the Science Center in the Inner Harbor as part of the Waterfront Partnership's  first-ever Baltimore Floatilla. Another 100 paddlers from Tide Point joined the Canton group on its way to meet the infamous Mr. Trash Wheel and start the rally for clean water. Roughly 250 paddlers converged around the solar-powered, floating trash collector (which, by the way, scooped up 238.8 tons of trash last year). Under a bright blue Baltimore sky, participants in the Floatilla shouted "Fix the Pipes," demanding Baltimore City fix its century-old broken and leaky sewage and stormwater systems. To date, millions of dollars have been spent and millions more will be spent within the decade to ensure the cleanliness and safety of the harbor.

CBF recognizes and thanks the hundreds of volunteers and many partner organizations involved in our Baltimore restoration efforts. And we encourage everyone in Baltimore's neighborhoods to help in the restoration of the city and its waters. Together we will restore, plant, and paddle for healthy, clean, and sustainable communities and waterways.

Check out more photos and video of the Baltimore Floatilla!