Miles from the countryside, surrounded by townhomes and busy city streets in Prince George's County, Maryland, one organization is working to serve as a model for urban farming operations. Deborah Wren and the team at Eco-City Farms are working to prove that farming in urban environments is not only viable but is greatly needed in these areas. Wren, the lead farmer of Eco City Farms, draws on her experiences growing up on a dairy farm and studying anthropology in college as she connects people of various cultures, backgrounds, and classes to fresher food in the city. Wren works to ensure that Eco-City's motto of "growing great food, farms and farmers," spans across the organization's two farms in the county.

The Edmonston Farm, the first property Eco-City worked, was founded six years ago on 1.25 acres. The farm started with hoop houses and a small outdoor growing space in a highly residential area. The second property in Bladensburg is larger at 3.5 acres and is known for its permaculture, garden beds, and edible forest. Both properties are Certified Naturally Grown, which is "a practice managed by a farmer collective where farmers from around the world hold each other to certain standards." 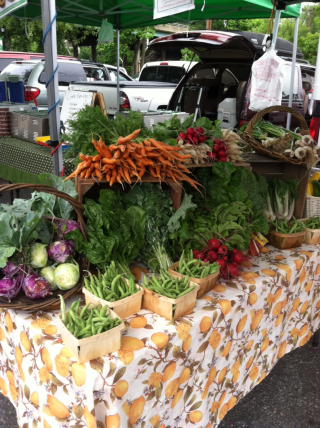 Farmer Wren credits her passion for farming to her upbringing. As one of seven children she was often working outside, helping her mother in the garden or helping her father with the cows. In her undergraduate studies in anthropology she traveled to a number of developing countries. She began drawing comparisons between urban areas such as those in areas like Washington, D.C. and Prince George's County to those in developing countries. The shocking similarities—lack of resources, environmental issues, and lack of access to essential resources such as food—motivated her to make a change upon returning to the United States. Wren began her career with Eco-City Farms as an apprentice just five years ago and is now the lead farmer in her third growing season.

As one can imagine, farming techniques are different for urban agriculture. For example, tractors do not till the soil and extensive sprayers do not water the crops. A part of changing farming into urban spaces is adapting the growing practices as soil, water, and even temperature are all different in the city. Eco-City Farms works with these changes to provide fresh sustainably grown produce year-round to its local community. Adjusting to the land is just one factor as Eco-City Farms also works to appeal to different cultures. Nearly 48 percent of its customers and volunteers are Spanish speaking. The organization has an education and outreach coordinator who is fluent in Spanish as the farms are located in what many locals call "Little Mexico." Addressing the cultural differences and unifying people through food is something they hope to achieve as they look to reach a broader audience.

Eco City Farms offers two-size CSA shares and allow members to apply and pay weekly, providing more flexibility to those in lower income communities. In addition to their CSA share, it sells fresh produce at the Riverdale Park Farmers Market on Thursdays and the Port Towns Farmers Market on Saturdays.

Eco-City Farms not only works to deliver food to those with limited access but also provides resources such as nutrition-based education, training programs such as the Beginner Farmer Rancher Training program, as well as hosting composting workshops, and beginner farmers for apprenticeships. Eco-City Farms is a model for the future of urban farming, led by people who want to reconnect people to fresh, healthy food, regardless of their culture, class, or location.

Learn more about how farmers across the watershed are working to improve both water quality and farm productivity in our Farmers' Success Stories series.

Happy to see you and the little getting your hands in the dirt Deborah! Keep up the good work ECO!

nothing better than a bit of gardening. It's amazingly therapeutic.