Atlantic Sturgeon: A Perfect Poster Fish for the Blueprint 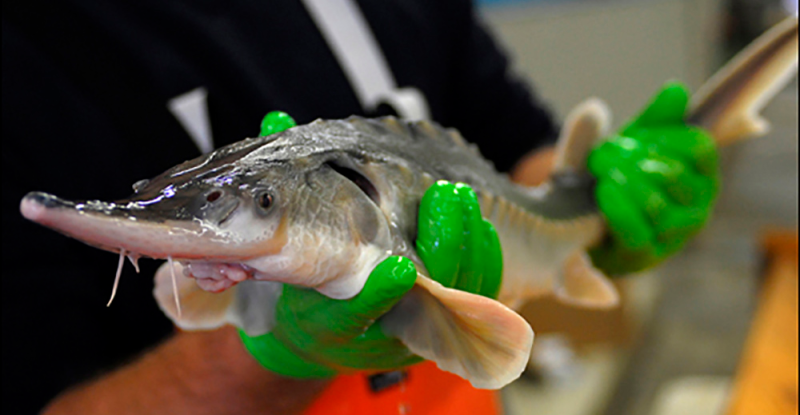 The following first appeared in the fall 2016 issue of Save the Bay magazine.

"They need our help," explains Doug Myers, CBF Senior Scientist and in-house sturgeon expert. "Sturgeon have had a lot happen to their habitat over the years. Today, the Chesapeake's only confirmed breeding population is in Virginia's James River. We need to expand their reach so if something disastrous were to happen on the James, the fish wouldn't be wiped out."

A lot has happened, too, since we featured sturgeon in the Summer 2011 issue of Save the Bay magazine. The year after our article ran, the National Oceanic and Atmospheric Administration Fisheries listed Atlantic sturgeon as endangered.

In our story, "Last Refuge of the Dinosaur Fish," Matt Balazik—at the time a Virginia Commonwealth University graduate student and sturgeon census taker—was pictured tossing a 70-pound sturgeon back into the James River. Today Matt, now Dr. Balazik, an integrative life sciences Ph.D., is a faculty researcher at VCU's Rice Rivers Center. The next step for the fish, he says, is habitat designation. "We've learned a lot in the James. As of a couple months ago," Balazik says, "we've identified two spawning groups in the James." According to Dr. Balazik, each group has different staging and spawning grounds. One group spawns in the spring, the other in fall. "I think it's massive to protect the spawning grounds that we are zeroing in on using telemetry data." Although protecting the area "where the magic happens," is important, he says, "the whole river plays an important role in the health of the fish, from the headwaters to the mouth of the Bay where they spend their first years of life."

On the case at CBF is Doug Myers. While the endangered species listing goes a long way toward protecting the fish, Myers says NOAA also needs to designate critical habitat for sturgeon. Under the Endangered Species Act, critical habitat is defined as "the geographical area occupied by the species at the time it is listed on which are found . . . features essential to the conservation of the species." It can also include areas not currently occupied by the species but that are imperative to its restoration. In the Chesapeake Bay, 453 miles of river are proposed for critical habitat and include feeding and spawning grounds.

Rivers with areas under consideration for critical habitat include the Susquehanna, the Potomac, the Rappahannock, the York, and the James. But the question arises: How are sturgeon to get to these rivers, especially the Potomac and Susquehanna, for the fall spawning season when the main body of the Chesapeake Bay suffers from annual low-oxygen dead zones in the summer?

Myers argues there is a direct link between the fish and the goals of the Chesapeake Clean Water Blueprint. "Once the critical habitat is designated, we'll have the Endangered Species Act . . . adding emphasis to the Blueprint."

"Because of their oxygen requirements, Atlantic sturgeon are the perfect poster fish for the Blueprint," says Myers. The Blueprint is a federal-state plan designed to improve water quality across the watershed by reducing pollution from agriculture, runoff, air, and wastewater. In February, the U.S. Supreme Court decided not to hear the American Farm Bureau Federation's appeal attempting to throw out the Blueprint. The court's decision let stand two lower courts' rulings that the Blueprint stands on firm legal ground. Moreover, as a federal and state program, the Blueprint and its regulatory and funding provisions have a "federal nexus" to the sturgeon listing. So we expect that the critical habitat designation will force a more intimate coordination between federal agencies.

Atlantic sturgeon require rough, gravely bottoms for spawning and clean, oxygenated waters. Polluted runoff, which carries toxins, bacteria, garbage, and sediment, flushes into our waterways after a rainstorm. This debris and sediment make its way to river bottom and threaten spawning grounds. By reducing the amount of pollution-laden sediment reaching these rivers, water quality improves for all species that reside and come to spawn.

As bottom feeders, Atlantic sturgeon are dependent on benthic organisms like mussels, worms, and small crustaceans. And sturgeon depend on a minimum of 6 mg/L of oxygen in the water to survive. A NOAA Fisheries' critical habitat designation, however extensive and inclusive it ends up, is vital to sturgeon survival and will be another tool to combat the ills the Chesapeake Bay faces.

Atlantic sturgeon doesn't reach maturity until age 10 to 15 and only spawns every two to three years, making recovery slow. Sturgeon are anadromous fish that enter the Chesapeake Bay in the spring and fall to spawn in the upper reaches of its rivers. At least that's what they use to do. In the late 19th and early 20th centuries, driven by a demand for their eggs, otherwise known as caviar, Atlantic sturgeon were nearly depleted. The fish faced additional obstacles like dams blocking their way up river and reduced spawning grounds. Boat and ship strikes also threatened the large fish. The issues sturgeon have faced have brought the species near extinction.

Readers who want to witness a sturgeon, can contact Captain Mike Ostrander (mike[at sign]discoverthejames.com) and sign up for one of his sturgeon tours. The two-and-a-half hour, Thursday-night excursions are scheduled to leave Hopewell, Virginia, at 5 p.m. on September 1, 8, 15, and 22. Captain Mike has been a river guide on the James for 16 years. He "found it natural to want to share the opportunity to see a breaching sturgeon. When you see one," he says "it's like the end of a fireworks show."

This dinosaur-era fish has endured millennia. In spite of overharvesting and habitat destruction, we may be witnessing a comeback, but we need to protect and restore the historic spawning and feeding grounds and the sturgeon's pathways to and from those grounds so this species has a fighting chance.

UPDATE: On August 31, CBF submitted its official comments to the NOAA Fisheries office, urging them to make water quality a top priority as they designate critical habitat for the Atlantic sturgeon and manage it into the future. More than 8,000 advocates joined with us in standing up for this ancient and important fish—the Chesapeake's largest and oldest. Click here to see our letter and the signatures of those supporters. We expect to hear a final decision on the Atlantic sturgeon habitat designation by June 3, 2017. Stay tuned for updates!

From the very beginnings of the colony of Virginia, sturgeon was an important food. Isaac Weld, an Irish writer and explorer, visited Virginia between 1795 and 1797. According to him, a Virginia-style barbecue may have included a barbecued pig or a barbecued sturgeon:

"The people in this part of the country, bordering James River, are extremely
fond of an entertainment which they call a barbacue [sic]. It consists in a large
party meeting together, either under some trees, or in a house, to partake of a
sturgeon or pig roasted in the open air, on a sort of hurdle, over a slow fire."

About one month after colonists first arrived in Virginia, they found sturgeon that were huge and abundant. John Smith told us that they once took fifty sturgeon at a draught and at another sixty-eight. The colonists were catching sturgeon that were as long as three yards. From that time, sturgeon, also known as Charles City bacon, became a very important part of Virginians’ diets.

One 19th-century writer noted, “When Charles City bacon was plentiful, everyone was happy.” Because sturgeon in Virginia’s waters grew to as much as fourteen feet long and often weighed hundreds of pounds, it’s easy to see why Virginians barbecued them low and slow just as they would a hog. In the 1890s, the sturgeon population in Virginia’s rivers began to dramatically decline due to over fishing, and by the turn of the twentieth century, the sturgeon population had crashed.

Near the end of the 19th century, Virginia's legislature passed laws to protect the sturgeon population by restricting the size of fish caught to 6' or longer. The problem with the law, unknown at the time, was that female sturgeon didn't reach sexual maturity until the were at least 6' long. So, all the law did was to allow fishermen to catch the very fish that were essential to saving the species in Virginia's waters. In 1926, operators closed the last sturgeon fishing operation on the Potomac.

It's time we Virginians did the right thing and work to restore a thriving population of sturgeon in our waters.