Home About Subscribe CBF Blogs Join Us Take Action Donate
Photo of the Week: Outrunning the Storm
This Week in the Watershed: A Major Investment

Slowing the Flow: Fixing Flooding with Gardens and Wetlands 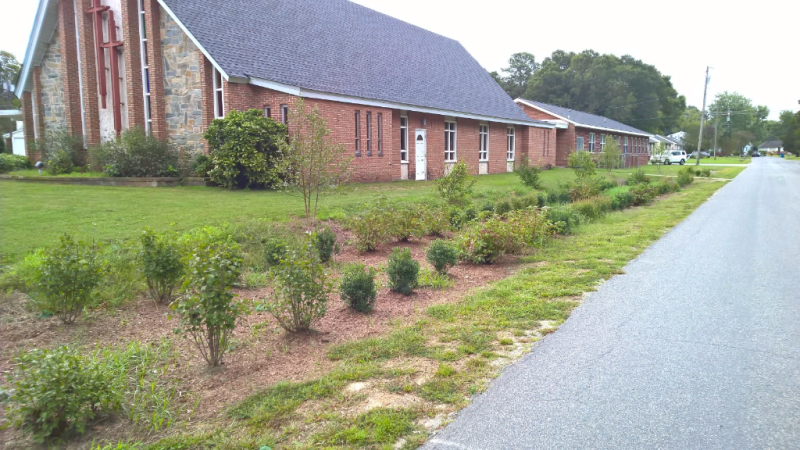 The three houses probably should never have been built on the low swampy ground in the James Terrace neighborhood in Williamsburg. Every time heavy rain fell, water filled crawl spaces, and yards flooded. At one property, the house would nearly become an island after storms. The site was developed in the 1950s, and because of poor drainage, it wouldn't pass muster for a new home today. 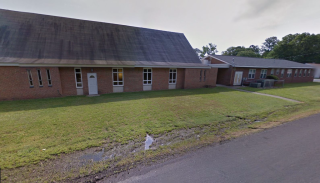 Fortunately, with the help of a grant from the Stormwater Local Assistance Fund (SLAF), homeowners, a local church, and James City County were able to work together on a holistic solution. The system of rain gardens and wetlands put in place has not only reduced flooding, it's also stopped polluted runoff and beautified the neighborhood.

The first step began with Grace Baptist Church, which sits on high ground above the homes. Rain would wash off the church's roof and parking lot, sending runoff down the slope into the neighborhood. This created a "domino effect" of flooding, said James City County Stormwater Director Fran Geissler.

"We wanted to slow down all of that water and catch it before it runs down the hill," Geissler said. 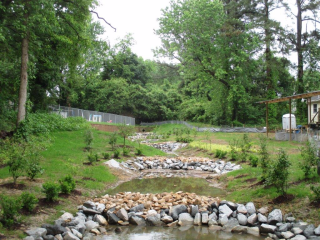 A series of cascading pools to reduce flooding and polluted runoff in the neighborhood. Photo by Stephen B. Geissler.

The solution was to build a large rain garden on the side of the church facing the James Terrace neighborhood. The garden grows in a dug-out depression, which holds water flowing off the church roof and lot. It's filled with native plants that soak up and filter this runoff.

In the past, rains would turn the area into a muddy quagmire where cars often got stuck. But since the garden was completed, the spot brightens up the roadside. "It has addressed drainage issues on one side of the church and also allows us to contribute to the community in a way we haven't before," said Pastor Stephen Wiley of Grace Baptist Church. "The garden beautifies one side of the church and also helps our neighbors. The more water we hold back, the less flooding they will have downstream."

The next step was to address the downhill properties that were experiencing flooding, where three homes were built on a former swamp. The solution was to build two series of cascading rocky pools surrounded by shrubs and grasses, basically reconstructing 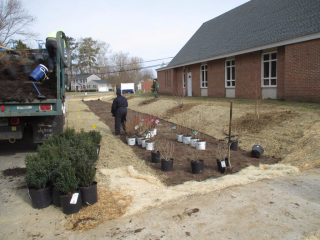 those wetlands. "Parts of the yards were turned back into their natural state," Geissler said. The county worked closely with homeowners to make sure they were pleased with the result.

The garden and wetlands were completed last summer, and since then the area has experienced heavy rains. But the project is working, and has reduced flooding substantially, Geissler said. The county is now completing the final phases, which involve upgrading drainage downstream of the neighborhood.

The pools and the garden also filter out pollutants like nitrogen and phosphorus and remove bacteria, which would otherwise flow into the James River and, eventually, the Chesapeake Bay. These solutions are part of meeting Virginia's commitments to restore the Bay under the Chesapeake Clean Water Blueprint.

State support from the Stormwater Local Assistance Fund was crucial to making it all a reality, according to Geissler. "I doubt this project would have been built without SLAF funding," she said. "SLAF funding provided an impetus to county decision-makers to provide additional funds to address stormwater issues in the neighborhood."

Stay tuned for more stories of how innovative projects like these can help Virginia stop harmful polluted runoff from entering our rivers, streams, and Bay!