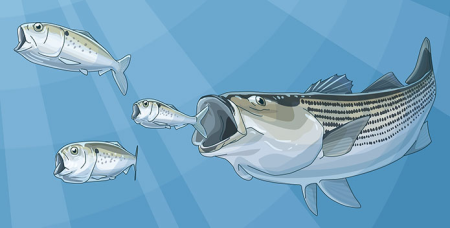 Menhaden are the fuel of the Bay's food web, providing critical sustenance to other Bay species like rockfish. Graphic courtesy of The Pew Charitable Trusts.

Small, silvery, and packed with nutritional might, menhaden have long been thought of as "the most important fish in the sea." And the other week, they once again came to the forefront of fisheries management and Chesapeake conservation.

On October 26, the Atlantic States Marine Fisheries Commission (ASMFC), which manages the coast-wide catch of menhaden and 23 other migratory fish species, met in Bar Harbor, Maine, to revisit menhaden's harvest cap for next year.

Menhaden are a fundamental link in the Bay's food web, serving as valuable sustenance for striped bass and many other important fish, marine mammal, and seabird species. Their health directly affects the health of the entire ecosystem. Yet the menhaden population has faced a long history of large-scale industrial fishing and historic low abundance in recent years.

We sat down with Bill Goldsborough, CBF's Fisheries Director and former ASMFC Commissioner, to get a better understanding of what happened at the meeting, and what it means for the fate of this all-important fish.

What happened in October?
ASMFC took up the issue of what the menhaden quota should be for 2017 after delaying the decision at its August meeting. A compromise was reached to increase the current harvest cap by 6.5 percent, bringing the menhaden catch limit up to 200,000 tons. That number was judged to be the middle ground among nine different options considered in August, ranging from keeping the status quo all the way up to increasing the catch limit by 20 percent. This quota is only for one year before the new management plan (or Amendment Three) comes into place in 2018.

What does this mean?

It's disappointing. With menhaden still not abundant throughout their geographic range and continued concerns about recruitment in the Bay, staying the course would have helped ensure a healthier menhaden population for all stakeholders—the reduction industry, bait fishermen, anglers, conservationists, etc.

What's more, we're not being consistent with the objective that the ASMFC has had for 15 years to account for menhaden's ecological role, something the commission is planning to do in 2018 by adopting "Ecological Reference Points" (ERPs) under Amendment Three. (ERPs are guardrails for managing the harvest while leaving enough menhaden in the water for the ecosystem.) The bottom line is there was too much political pressure to have an increase right now. 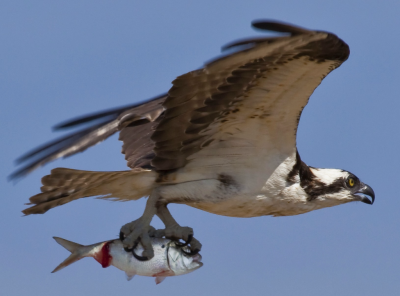 A hungry osprey with his menhaden lunch. Photo by iStock.

Why are menhaden so important?
Menhaden are the fuel of the food web, and we control the flow. Too low and we have problems with striped bass nutrition, diseases, mortality, and so forth. For a predator like striped bass that depends a lot on menhaden, if there are not enough menhaden available, they will shift to something else that's probably not as nutritious. They might shift to blue crabs—is that better for the bigger picture? It's a tradeoff between management objectives. You have to think in an ecosystem-sense rather than a single-species context for ecologically important fish like menhaden. It's important to remember that leaving menhaden in the water to be eaten satisfies an important management objective to keep the ecosystem healthy. You get incredible value from leaving these fish in the water.

What's next?
ASMFC will develop a new menhaden management plan (Amendment Three) for 2018 based on public comment from all stakeholders as well as scientific data and expertise.

This new plan will give us ecological reference points, and it will give us a new framework for allocating the menhaden catch quota among the states, among the industries, and so on. Right now it's done by state—each state gets a certain percentage of menhaden catch, and Virginia gets 85 percent out of the entire coast, while some states get less than one percent

One type of ecological reference point that CBF and many other groups support would maintain at least 75 percent of the virgin biomass [how many fish would be in a natural system before any harvesting] in the water for the health of the ecosystem.

The first public comment phase on the new menhaden management plan ends January 4, 2017. Click here to take action now for the Bay and "the most important fish in the sea" before the January 4 deadline!


This year is a big year for you. You're retiring as CBF's Director of Fisheries next month after 38 years and leaving ASMFC after more than 18 years on the commission. What has been the biggest milestone for you, particularly in your time with ASMFC?
Actually getting a quota on menhaden with Amendment Two was the biggest milestone that I was part of at ASMFC. And if Amendment Three proceeds the way it's supposed to, that will probably supersede Amendment Two as a milestone.

Before Amendment Two, there was no limit on the catch of this ecologically critical fish. No limit! And it was the biggest fishery on the East Coast, and annually in the top five nationwide—West Coast, Gulf Coast, Alaska. That's high volume! Getting a quota set at a conservative level—20 percent below what it had been—was probably the biggest milestone for me.

There's been a whole lot more focus on the importance of forage fish in general in recent years, and I think a lot of that derives from the two decades that we've been working on menhaden.

Over the next few weeks, ASMFC is holding public hearings about its revised menhaden management plan. Stand up for this important fish at one of the public hearings in Maryland, Virginia, and other coastal states. Click here for the full list of hearings.

Learn more about menhaden and why they are so important at our next Blue Planet Forum.