Home About Subscribe CBF Blogs Join Us Take Action Donate
Photo of the Week: Big Bird and Toadfish
The Smell of Saving the Bay 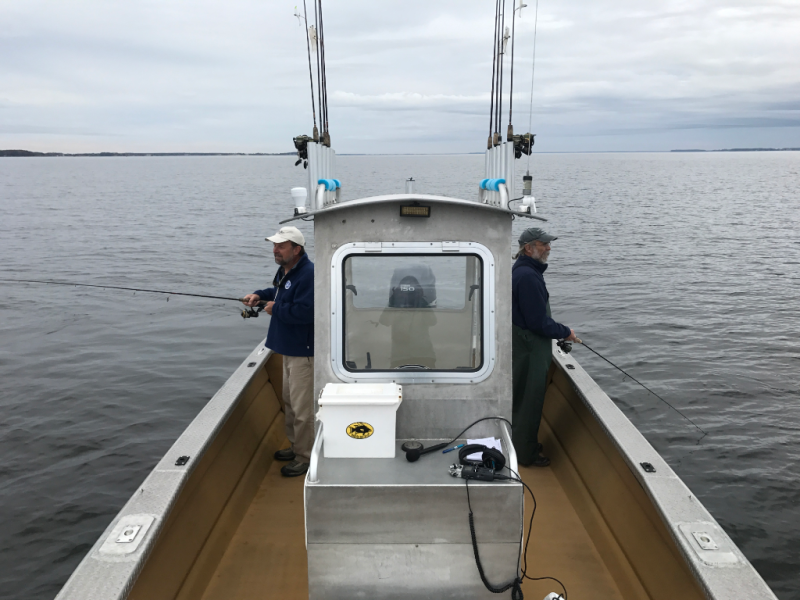 In many ways, their stories are the same. Self-described marsh rats, Bill Goldsborough and Chuck Foster both grew up on the Eastern Shore with Bay blood coursing through their veins and fishing rods in their hands.

"We fished for as long as I can remember," says Goldsborough. "I was going out on the Bay with my dad . . . We had an old 40-foot workboat called the Mermaid, this old beat up thing that he and his buddy on Kent Island bought together. [It was] a real fun adventure keeping that boat running and getting out and catching all kinds of fish . . . we had 100-fish days regularly . . . just me and my dad." It's no surprise that Easton native Goldsborough credits his father for instilling in him a love for fishing and the Bay. A love that eventually led him to CBF, first as an educator on Smith Island and then as the founder and director of our fisheries program.

Foster, too, grew up on the water and among the marshes on Saxis Island in Virginia, just six miles from what is now CBF's Fox Island Education Center. His was a childhood ruled by tides, full moons, and blue crab harvests. He recalls days getting out of school early in order to get back to Saxis before a full moon high tide flooded the road. Coming from a family of watermen, fishing came easily—and early—for Foster: "At six years old, I'd go out with my grandfather . . . he had a little bed on his boat. He was not noted for his patience, but he had the patience of steel when it came to me . . . you can imagine a six-year old on a crab boat all day long. I got into a lot of stuff." Years later, it was only 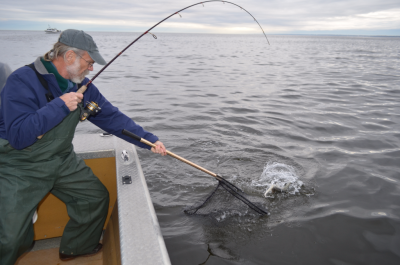 Bill Goldsborough wrestling with a rockfish on a recent fishing trip on the Bay.

natural that Foster came to CBF. Like Goldsborough, he began his CBF career in its education program, starting as an educator on Fox Island and then eventually serving as the organization's first Chief of Staff. "I just fell into it. Fell right into the briar patch and luckily I recognized that pretty early on," Foster reflects.

On a recent gray day in November, I invite myself along on a Goldsborough/Foster fishing trip. There have been quite a few over the years for the good friends, trips ranging in location from the Florida Keys to all over the Chesapeake. But this one would be their final trip together as CBF colleagues. Both Bay legends—who have spent a combined nearly 70 years at CBF (roughly 32 for Foster; 35 for Goldsborough)—are retiring this month, leaving the Foundation in favor of more time out on the water, in boats, and around fish. 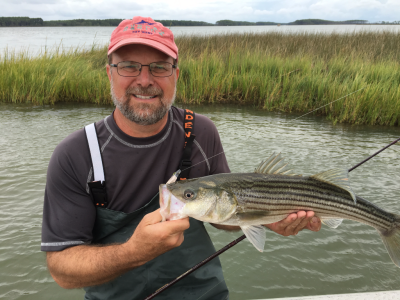 Chuck Foster doing what he does best on a recent fishing adventure off the Eastern Shore.

The sky is dripping, draped with a low-hanging stretch of wet clouds as we motor south toward Poplar Island on Foster's 24-foot, custom-built Hanko. There is a lot of stopping and starting, patiently scanning the horizon with binoculars, looking for seabirds, a sure sign of stripers just below the surface. There is not a lot of talking. When we arrive at a spot deemed worthy near Eastern Bay, Foster cuts the engine and almost immediately rods are in the water. Without saying a word, Foster and Goldsborough find their respective places on either side of the stern—their routine is as natural as their way around a boat, around the Bay.

As we wait for the fish to come, the conversation ranges from ruminating on a Jim Morris song lyric, to reflecting on the way the nearby gannets slice through the air, to, inevitably, talking about the importance of water. "I can't imagine my life not involving water," says Goldsborough. "I went to college in the foothills of the Blue Ridge and for a while there was this competition between the sea and the mountains. But really there was no contest. I was always going to come back here to the water . . . Has to have salt in it though." Foster chimes in: "It's unnatural otherwise." 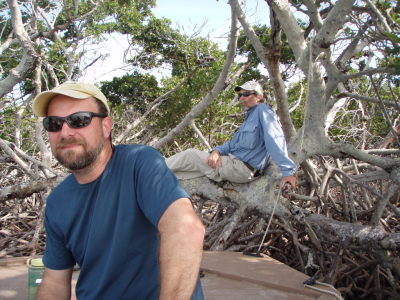 Chuck Foster and Bill Goldsborough took many fishing trips together over their more than 30-year friendship, including to places as distant as the Florida Keys.

It's not long before Foster snags a hearty 28-inch rockfish. He quickly and expertly unhooks the flopping beauty and lays it in the bottom of the cooler, right next to the water bottles and other provisions we've brought for our journey. "Everything's better with a little fish slime on it," he jokes.

When asked how he's feeling after more than three decades at CBF, on the eve of his retirement, Foster turns serious: "Obviously it's bittersweet. I've spent almost 32 years of my life in one place. But the Foundation and the Bay are going to do well . . . and I do think we have turned the corner. I mean look at how clear this water is right now. I don't recall seeing water this clear since a kid."

Goldsborough, too, is hopeful: "After many years and many failed voluntary agreements by the states to take whatever action was necessary [to restore the Bay], and the Bay kept getting worse—algae blooms, dead zones, grasses weren't coming back at all—you start to get a little discouraged. And I figured that there would be little chance that I would see the Bay restored even to what I've known as a kid, much less to a really pristine, healthy Bay. But now," he motions to the clear, flat water below us, "now it seems like all Chuck and I had to do was set a time table for retiring, and now the Bay is looking better!" 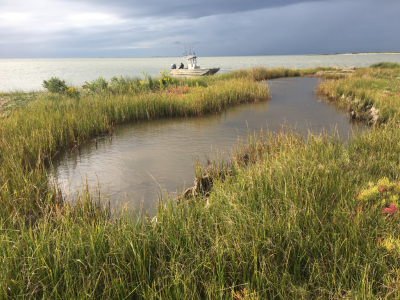 "I can't imagine my life not involving water," says Goldsborough.

He later expands: "We've seen the grasses bounce back a little bit; we've seen the blue crabs come on a little bit in the last few years; [it] appears that the dead zones are smaller. That's all interrelated and all extremely hopeful. It's tempting to think that we're really turning the corner with the Bay."

While at CBF, Foster and Goldsborough have made countless contributions—from launching the Foundation's fisheries program, to building one of the world's greenest buildings, to tirelessly fighting for the Bay's rockfish, oysters, and crabs, to helping build and run the organization, to educating future stewards of the Bay. But out here on the water, there is little talk about their achievements and their invaluable work for the Bay and its rivers and streams. That is not surprising given the nature of these good-hearted, modest men.

A few hours later, on the way back in, back home to Annapolis, red light inches up from the horizon ever so slightly and we are chilled to the bone. The Bay stretches out before us, flat and calm and beautiful. "There are a lot of amazing things you see out here," says Goldsborough, "and they just sort of accumulate over time and make up this great mosaic of Bay experiences . . . every year you see and learn new stuff that you never thought of before."

Goldsborough pauses and looks at his friend before continuing: "You never know it all. It's kind of what's so interesting about it and keeps us coming out on the water I think."

"It's almost like the older I get the less I think I know," adds Foster from behind the wheel.

I first met Bill on a CBF family trip to Smith Island around 1980.
If one asked bill what was the biggest one that he hooked, he would probably think for a moment and come up with something like "a 50 inch rockfish." But around 1985, my son and I joined a CBF tent camping trip to one of the barrier islands on Virginia's Eastern Shore. Bill was kind enough to invite us to join the "after trip" to do some more fishing with the CBF staff. We motored out through the shallow bays and cuts to the inlet and fished until Bill noticed serious storm clouds gathering. We started to raise the anchor and found it hooked on a big one. We tried all manner of hauling and tugging before we brought up what certainly was Bill's biggest catch - a 3000 mile long trans-Atlantic phone cable. That was interesting, but the real excitement began when the storm hit with full fury of constant lighting and torrential, blinding rains that allowed 50 foot visibility. The run back in the open liberty boat with no shelter aboard was something no one will forget as we tried to feel our way from marker to marker across shallow bays, of course without radar, GPS or depth sounder.
Thanks Bill. See you in the marsh.
Wishing you tight lines, fair winds and following seas.
Bob Christensen
https://www.flickr.com/photos/baldeaglebluff/albums/72157602294475940

Virginia watermen are a uique breed. Thank God for them. My father (God rest his soul) loved the
Virginia waterways and fished summer and winter even though he was not a waterman. He just loved to fish. He has passed on now but these informational e-mails about the water and the men who live and
work there, bring back fond memories of my father.

I wish you well on your retirement, Bill. Always a hero of mine.

Congratulations on your well deserved retirement Bill. Your legacy will live on in the Chesapeake.

Go fishing by boat is a great way to confidence with anybody. Great idea.