Millions of Gallons of Sewage-Contaminated Water Overflowing in Baltimore 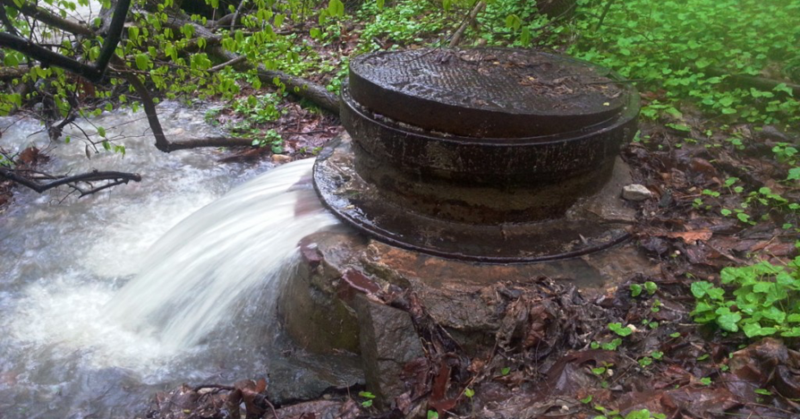 It's horrifying: During heavy rains, Baltimore's failing sewer system continually overflows, contaminating residents' homes, local waterways, and Baltimore Harbor. In fact, after a recent February storm, 12.6 million gallons of sewage-laden wastewater steadily flowed into Baltimore's rivers, streams, and harbor. As appalling as this was, this wasn't the first time this has happened in Maryland's largest city.

We find this ongoing sewage overflow problem simply unacceptable. Baltimore City and its waters are still suffering from a 19th century problem in the 21st century. The city was supposed to have put an end to this problem by January 2016 yet the city's government, EPA, and MDE have let that deadline pass with little action.

CBF is demanding that a new consent decree be issued immediately with near-term, enforceable deadlines and that meet water quality standards. We have sent a letter to agency heads, city officials, and state legislators detailing what we hope to see in the new agreement. Click here to read it. It is our expectation and hope that current and future elected leaders in Baltimore make this the priority it needs to be.

In order to better understand this issue, we took a look back at how Baltimore got into this appalling situation...

What Is the Baltimore City Consent Decree?

Because Baltimore City's sewage system was allowing pollutants to enter local waterways and Baltimore Harbor, the United States and the State of Maryland sued the city to require that the problem be remedied to bring the city into compliance with the Clean Water Act. To avoid a court trial, the city entered into a Consent Decree (CD) with the United States and the State of Maryland on September 30, 2002. A CD is the settlement of a lawsuit in which a party agrees to take specific actions without admitting fault or guilt for the situation that led to the lawsuit.

The Baltimore City CD required the city to eliminate all existing sanitary sewer overflows (SSOs) and combined sanitary overflows (CSOs) to prevent raw sewage from entering the waterways around Baltimore City. Additionally, the city was required to undergo comprehensive sewer evaluation and rehabilitation programs and perform continuous upgrades to their operations and maintenance.

Progress Toward Completing the Consent Decree

The CD provided a 14-year timeline, with all upgrades to be completed by January 1, 2016. The city missed the final deadline under the CD. According to a recent quarterly report, the city is a long way from completing the work required under the CD—it has only completed 31 of the 55 projects with deadlines provided in the CD.

Baltimore's failure to address the unresolved SSO and CSO structures is a significant water quality and human health hazard. Raw sewage from these structures flows into the Inner Harbor and Baltimore waterways and, on numerous occasions, has backed up into city homes. This not only leads to potentially harmful fecal bacterial and viral contamination, but causes financial losses, stress, and health risks to vulnerable residents in the affected areas.

The sewage backups in homes pose a tremendous human health risk. What's more, those residents in Baltimore's wealthier suburbs do not see the same disregard from local authorities when sewage backs up in their homes. Baltimore City has challenged the majority of claims arising from damage caused by backed-up sewage (approving only nine percent of the damage claims). In the Grove Park, West Arlington, and Glen neighborhoods of Northwest Baltimore, residents filed 34 claims—all affected by sewage backups into their homes in the last three years and all of which were denied or unaddressed by the city for more than a year.

The Future of the Consent Decree

EPA and MDE are now working with the city to develop a new deadline to achieve the requirements of the CD. Baltimore has already asked for lengthy extensions in the deadlines for some of the CD's required construction projects, some reaching as late as 2019 and beyond. A short timetable and a new deadline for the CD is imperative to cleaning up the water around Baltimore and alleviating the harm to homeowners and residents of the city. Stretching the deadlines for construction projects many years into the future leaves residents susceptible to financial harm and health risks and puts the Inner Harbor and the waterways around Baltimore in danger of fecal bacterial contamination.

There is no reason to delay further. The current situation constitutes nothing less than a serious crisis for Baltimore City, the harbor, and the Bay. It is time to bring Baltimore into the 21st century with a sewage system that doesn't degrade its waters and the health and well-being of its citizens.

Take action right now to tell elected officials and environmental agencies that we must see a legally binding agreement that effectively tackles the sewage in Baltimore's streets.

And we want to hear from you! If you have experienced flooding in your basement, on your property, or on your street as a result of these sewer overflows, please send an e-mail with details to our Baltimore Director Terry Cummings at TCummings@cbf.org. We're working on documenting real stories and incidents related to these overflows, and your story could play a critical role in ensuring the new legal agreement to clean up Baltimore's failing sewage system is strong, timely, and has real consequences for failure.