Forster's terns appear to be staging for their fall migration in late November. Most will leave the Bay by mid- to late December, coinciding with the arrival of cold weather. These terns are buoyant in flight, especially when diving on small fish at the water's surface. In fall, they can be seen mixed in with several species of gulls diving over hungry rockfish, foraging on schools of menhaden, silversides, or anchovies.

These medium-sized terns nest in marshes in summer and then winter along the southern U.S. coast. Their nests vary from being an unlined scrape in mud or sand to an elaborate raft of floating vegetation. Typically placed in clumps of marsh vegetation close to open water, they occasionally nest atop muskrat lodges.

Forster's terns' red-orange bill with black tip in summer changes color to black in winter and their summer breeding plumage black caps become comma-shaped black smudges on each side of their head. These are the terns we see most often up tributaries far from the Bay.

Posted at 11:17 AM in Bill Portlock in the Field Series, Chesapeake Bay, Virginia | Permalink | Comments (0)

The waterman works aboard his well-maintained deadrise Third Son, using patent tongs to harvest clams. The hydraulic tongs are operated with foot pedals, one to open and close the tongs, the other to raise and lower them. The patent tongs are lowered to the Bay floor where they extract a clump of Bay bottom, with clams included. The hard clams or quahogs (also known as little necks, cherrystones, or chowders based on their size) can live 40 years or more if they escape predation.

In 1758, Swedish botanist, physician, and zoologist Carl Linnaeus, who formalized the modern system of naming organisms called binomial nomenclature, gave the quahog its scientific name Mercenaria mercenaria because beads of quahog shell, fashioned by Native Americans, were used for currency in 17th century New England. "Mercenaria," is derived from the Latin word for wage.

On a recent spring morning, I was fortunate to be in my skiff on Cat Point Creek, a tidal tributary of the Rappahannock River in Richmond County, Virginia.

Eagle-rich Fones Cliffs, just four miles upstream from Cat Point Creek, is a unique Bald Eagle concentration zone, with thousands of eagles from Labrador to Florida as well as native Virginia birds using the area for nocturnal roosts, foraging, and (for residents) nesting. Many eagles spill over into Cat Point to forage on its abundant fish, primarily blue catfish and gizzard shad, but at this time of year there are migratory river herring and shad in the river. That the herring spring run to spawn is tied to bald eagle reproduction is yet another interwoven cycle of nature. It is a cornucopia of protein for a couple of months. 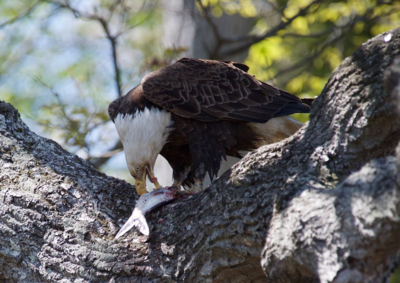 One eagle caught my attention that day by successfully capturing an alewife, a river herring just in from the ocean to spawn, in an oxbow of the creek. After the successful catch, he flew to a low branch over the water to eat his catch. Males are about 20 percent smaller than females, and when females are incubating eggs, males do most of the fishing. I allowed the ebbing tide to quietly drift me toward the scene. Today, this eagle was more focused on consuming his meal than paying attention to me.

Alewives and blueback herring are related to hickory and american shad and are members of the herring family (Clupeidae). These are anadromous fish, meaning they spend the majority of their adult lives at sea and migrate up coastal rivers in the spring to spawn in freshwater.

Bald eagles reproduce earlier than most birds in the Bay region, starting nest construction or repair in December and January. Egg laying and incubation takes place as early as December (and can run until March) in the Chesapeake Bay region. The hatching and rearing of young eagles takes place from March to June. Thus, the spawning run of herring and shad feed young eagles and the parents.

There were dozens of Wilson's snipe feeding on insect larvae, worms, and other invertebrates in the arrow arum marshes. These medium-sized shorebirds frequent the creek during winter before migrating north in April. Two pairs of blue-winged teal and a handsome pair of common mergansers were the only ducks present. But the main show on Cat Point that morning was this adult Bald Eagle capturing and eating this 12-inch river herring right in front of me.

At one time in the not-too-distant past, coastal rivers supported thriving herring and shad industries, with millions of fish harvested each year. However, populations of these fishes declined dramatically in the last century due to dam obstructions, overharvesting, and pollution. The river herring fishery (which includes the alewife and the blueback herring) has been one of the most valuable in the Bay, with annual catches once exceeding 8 million pounds in Maryland and 30 million pounds in Virginia.

But on this day, a migratory alewife was the prey of this hungry eagle. Drifting slowly in my skiff to within 30 feet of the perched eagle, I was able to quietly watch and photograph the eagle. I  felt privileged to be there.

The Great Egret is a large wading bird common to the Bay but residing largely along the Southeastern U.S. coast in winter. As spring arrives, they move north and west to begin building their stick nests in rookeries with other egrets and, often, with Great Blue Herons.

Earlier in April, near Blacksnake Island there were six pairs of Great Egrets and a single pair of smaller Snowy Egrets setting up housekeeping in a forest of loblolly pines and oaks in full flower. Their new nuptial plumes glowed in the afternoon light and waved in the 10-knot southeast wind. An osprey passing overhead got their attention but they remained in the canopy. There were nests to build and soon, eggs to incubate. An egret colony in its earliest, pre-nest stage: another sign of spring. 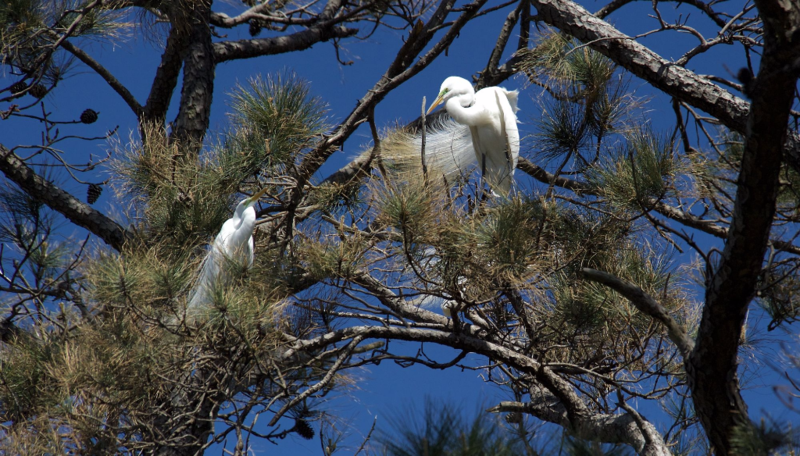 What's Bill Seeing in the Field: A Sure Sign of Spring

I found this spotted turtle around 10 a.m. on March 17 resting on a bridge over the Mattaponi River in Caroline County. The sky was clear and the turtle appeared to be gathering warmth from the sun on the cement. Cold-blooded reptiles often regulate their body temperatures this way. However, he was in a precarious location with turtle speed no match for passing cars and trucks. So I stopped to help him to a safer place. I also had my camera with me. I knew it was an uncommon turtle and did not want to disturb him for long, nor certainly remove him from his territory, but did want to document the species in Caroline County as well as share another sure sign of spring with my friends: a turtle emerging from hibernation. 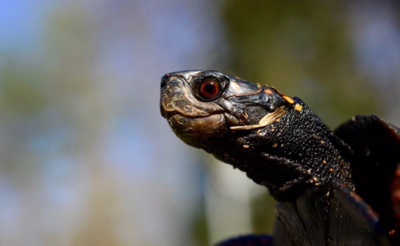 The spotted turtle (Clemmys guttata) is a relatively small, rare, omnivorous freshwater turtle of Eastern North America, with an adult's shell typically about five inches long. Its upper black shell is overlaid with an irregular, attractive pattern of yellow-orange spots that define the species. Males have brown eyes and a female's eyes are yellow. Males also have a concave plastron (under shell) whose shape is thought to facilitate mating. Spotted turtles seem to occur in small, localized populations with each having three to four different feeding territories—so they do move around. These turtles feed on algae and aquatic vegetation, insect larvae, worms, slugs, spiders, crustaceans, tadpoles, small fish—always eating in water. Males are actively looking for a mate right now, too.

Mid-March is the time spotted turtles emerge from winter sleep. From October to March they live underground and sometimes underwater, buried in mud

beneath muskrat lodges or sphagnum moss, with other spotted turtles in what is known as a hibernacula. They seem to have strong fidelity to these sites year after year. Surprisingly, they lose little body weight during these months of inactivity. Their peak time of activity is March through June, followed by summer inactivity. See below for more particulars on their habitat and biology.

Students on CBF education programs encounter species of aquatic turtles frequently. Red-bellied cooters, painted turtles, mud- and musk turtles, and even snapping turtles are common freshwater turtles. Spotted turtles are more rare and deserve our care and attention to making our watershed healthy by stopping polluted runoff. Just as with many other species, the presence of a spotted turtle is a welcome indicator of a healthy environment.

Biology
Spotted turtles aggregate in aquatic habitats in spring (usually in May) to mate. Nesting occurs from mid- to late June. Clutch sizes are usually 3-5 eggs. Most females do not produce eggs every year. The turtles reach sexual maturity when they are 11-15 years old. Summer dormancy, primarily in terrestrial sites, occasionally takes place from July through August and into September, after which turtles enter hibernation. These turtles live to at least 30 years old and can exceed 50 years.