This Week in the Watershed: A Cold Dip for the Bay

The moment a bunch of crazy Bay lovers (including dogs!) dashed towards the frigid Bay waters to thank our generous members for their support on Giving Tuesday. Photo by Elaine Lutz/CBF Staff.

For the second straight year, a bunch of CBF staffers took a dip into the frigid waters of the Chesapeake Bay as a thank you to the hundreds of generous CBF members who gave on Giving Tuesday.

Since 2012, the first Tuesday after Thanksgiving has been recognized as Giving Tuesday. Fueled by social media, this global day of giving raises tens of millions of dollars for various causes. This year we far exceeded our $15,000 goal.

The money raised on Giving Tuesday will help us do that, and more, in 2017!

P.S. Did you miss out on Giving Tuesday? Not to fear: Our special dollar-for-dollar match lasts through the end of the year. Click here to learn more and to show your love for the Bay and its rivers and streams!

This Week in the Watershed: Fish Talks, Reducing Runoff, and Poop Rules

What's Happening around the Watershed?

Posted at 12:47 PM in Fundraising, This Week in the Watershed | Permalink | Comments (0) 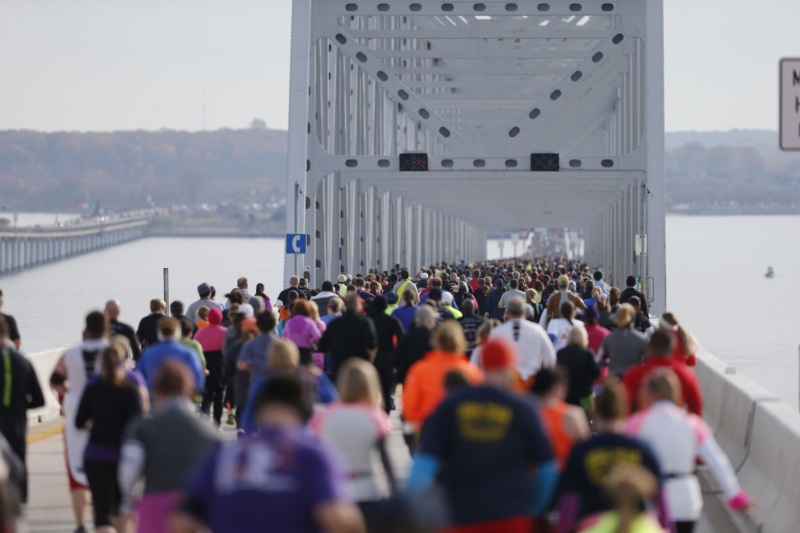 This November, 25,000 people from across the country will participate in an historic event—the third annual Across the Bay 10K Chesapeake Bay Bridge Run!

Scheduled for November 6, the run begins on the western shore of the Chesapeake Bay Bridge and finishes with a post-race celebration on Kent Island. Most of the course—4.35 miles—will be on the bridge itself overlooking the Chesapeake Bay. The dual-span bridge doesn't allow pedestrian traffic at any other time of the year, so this is a unique opportunity—and the view is amazing!

You can be part of the fun and support CBF! As an official charity partner we have a supply of charity bibs available for $150. This purchase guarantees entry into the race and provides a donation towards CBF's work to restore and protect the Chesapeake Bay. Click here to purchase your charity bib today!

Running not your thing? Sign up to be a volunteer! There are lots of opportunities to volunteer at packet pickup as well as on race morning.

For more information about the event, visit the official race website at bridgerace.com.

Thanks for your support–we hope to see you there!

Running to Save the Bay!

Nearly 15,000 people ran across the Chesapeake Bay Bridge on Sunday, Nov. 9, a stream of fit humanity in colorful tech attire arching over the Bay flowing beneath. All deserve praise for participating in the 10k, but one runner in particular, one speck of color out in front of that stream, deserves special mention.

On Saturday, cross country star Shreya Nalubola ran the final race of her illustrious high school career on what has been described as the toughest course in the state. The meet was the Maryland Girls State Cross Country Championship at Hereford High School. She came in third.

Rather than sleep in on Sunday, however, Shreya pulled herself out of bed, and ran the Across the Bay 10k Chesapeake Bay Bridge Race. No easy course itself, the bridge features a two-mile incline. Shreya came in first place in her age group, and 11th overall of 9,662 women runners!

Shreya, a senior at Centennial High School in Howard County, didn't do the Bridge Race just for more exercise, or the spectacular view. She is a student advocate for the Chesapeake Bay. She wanted to do her part to promote the national treasure and to underscore its endangered health.

"In sixth grade, I attended a field trip with my classmates to the Chesapeake Bay, where we were able to experience and study it in-depth. The field trip made an impact on my young mind as we fished for crabs and oysters, convincing me of the importance of preserving the health of our ecosystem," Shreya said.

This past spring Shreya also spent time on the Chesapeake Bay Foundation's skipjack Stanley Norman where she learned more about the human impact to the Bay's health. She decided to join CBF's Student Wave Leadership program.

Two other students chose to run in Sunday's race across the iconic bridge from Annapolis to Kent Island as part of their commitment to advocacy. Charlotte Waldman and Garrett Weintrob, both 10th graders at the Maret School in Washington, D.C., help support CBF's Oyster Restoration Center in Shady Side, MD, among many other activities.

"I hope that events such as the Across the Bay 10k will continue to raise awareness about the problems that affect the watershed, including pollution, agricultural development, and deforestation. In the future, perhaps changes can be made and efforts can be put into reducing pollution and restoring forest buffers in order to better support and protect the Chesapeake," Shreya said.

Thanks Shreya, Charlotte, and Garrett! The future of the Bay is in your hands—and running shoes.

Shady Side Elementary School Students Take a Stand for the Bay

Shady Side students planting oysters in the West River. Photo courtesy of Shady Side Elementary

The students at Shady Side Elementary School in southern Anne Arundel County, Maryland are no strangers to the Bay and life on the water. The town of Shady Side is located on a peninsula, surrounded on the north and west by the West River and on the east by the Chesapeake. Many students are children of watermen who still crab, oyster, and fish to make a living. The school sits less than a quarter mile from the water—and CBF's Maryland Oyster Restoration Center.

So, last year, when 5th grade teachers Kimberly McAllister, Molly Tremel, and Jenna Weckel asked their students to "Take a Stand" for a cause, the Bay seemed like the natural choice.

"These students were raised on the water. They're surrounded by it every day and, for many, its health has a direct impact on their lives. The students worked with CBF last year to grow oysters and then planted them in the West River. Meghan Hoffman and the rest of CBF's Maryland Oyster Restoration team really got the kids excited about oysters—and showed them that they can make a difference," said Tremel.

The students were so motivated they wrote letters and hand-delivered them to U.S. Rep. Steny Hoyer, U.S. Sen. Barbara Mikulski, and U.S. Sen. Ben Cardin urging them to continue funding Bay restoration. But they didn't stop there.

They took it one step further—creating postcards, developing a business plan, and selling the cards to friends, family, and others—to raise money to support the Bay. Their efforts were highly successful. In two years, they've raised nearly $4,000 to help CBF grow and plant more oysters in the Bay!

John Rodenhausen, Maryland Director of Development, was on-hand for this year's check presentation and was able to address the nearly 60 5th graders involved in this project. "As an educator and a fundraiser for CBF, it is moments like this that give me greater confidence that the Chesapeake will be saved, not just in these students' lifetimes, but in mine, too!"

The project has become a staple of the 5th grade experience—and a bit of a competition, too. Weckel explained, "We've already spoken to the incoming class about the project. They're excited and energized by the opportunity to raise more money for CBF than last year's class!"

We all have a role to play in saving the Chesapeake. CBF is grateful to the entire Shady Side Elementary School community, including 5th grade teachers Kimberly McAllister, Molly Tremel, and Jenna Weckel, as well as their students, for their support, ingenuity, and hard work.

Together, we will Save the Bay and its rivers and streams!

Are you stumped on what to get some of your hard-to-shop-for friends and family this holiday season? Well look no further...we've got some great ideas that don't require long lines at the mall or shipping, and they help save the Bay! What more could you want!

Gearing Up for the Season's Best Beach Party

Things here are really starting to gear up for next week's big fete! Our fourth annual "Bands in the Sand" beach party is next Saturday, June 13th.

Here at CBF we work hard -- but we sure know how to put on a party! BITS, as we call it in the office, is great beach party with excellent food, drinks, live music, and a live art auction. This year enjoy the wicked reggae of S.T.O.R.M. and dance to the rollin' rock of Misspent Youth. Misspent Youth's mix of classic and modern rock is more my style, but I checked out S.T.O.R.M.'s website and their video "Hola, Hola" hooked me, hooked me.

One of the (many) fun things about Bands in the Sand is you don't need to drive there. Have a boat? You can anchor off the beach and we'll ferry you in.

Tickets are $100 each and proceeds support CBF's education, restoration, and advocacy programs.

You can check out pictures from last year's party on CBF's website. Then get some friends together, order your tickets, and prepare to leave your shoes at the dock and chill out on the beach!

We hope you can join us!

Coffee for the Bay

The Starbucks Foundation, whose mission is "to create opportunities for youth to learn, serve & grow their natural potential to reinvent the world," has made a generous $50,000 grant to support CBF's Student Leadership efforts, providing a huge funding boost for the program.

In addition, from now through June 3rd, bring your own travel mug when you buy a drink at Starbucks and they'll donate 10-cents to the Chesapeake Bay Foundation.