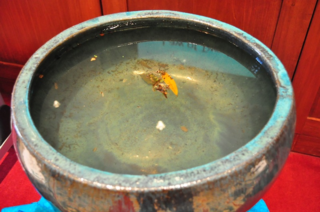 Participants in CBF's Living Waters Interfaith Summit brought samples of water from their part of the watershed to combine in this vessel. (Whitney Pipkin/Chesapeake Bay Journal)

The following first appeared in Bay Journal earlier this month.

The daylong event in November drew more than 130 people, including Bay Journal staff member Whitney Pipkin, from a variety of faith backgrounds and environmental groups to the Lewis Ginter Botanical Garden near Richmond, VA. It kicked off with a drum circle and ended, after much discussion, with a woman nearly in tears about what it meant to know she was “not alone” in her 40-year pursuit of faith-based environmental stewardship.

One of the event’s goals was to assemble a steering committee to carry on the conversation between faith-based and environmental groups. That steering committee now has 16 members from a wide range of church groups and organizations.

The nearly 60-page report also includes the full results of instant polls that took place at the conference with the help of electronic clickers. Attendees were asked questions about why they came and whether they identified with a certain faith tradition.

The full report is in some ways a template for interested parties to replicate the event on a local level, which was one of the most popular ideas at the conference. The report includes an itinerary from the event and lyrics to religious, water-oriented songs that were sung.

For those who weren’t able to attend the event, the report summarizes at length the panel discussions and presentations that took place in November. Among the most popular was a presentation by pastor and farmer Shelton Miles on “Theological Reflections from the Tractor Seat” (included on pages 12 and 13 of the report).

The report also summarizes the most popular ideas that were floated during an Open Space exercise in the afternoon of the conference. Participants split into various topic discussions throughout the building to begin jotting down faith-oriented solutions for some of the Chesapeake Bay’s most vexing problems.

Participants zeroed in on 18 different topics to help organize a faith-based effort to protect local waters, including efforts to mobilize leaders and share best practices across organizations.

The Living Waters steering committee will convene at the end of this year to discuss the outcomes of the summit and what might be next for ongoing faith-oriented efforts in the watershed.

The full report can be downloaded from CBF’s website. ​