To help boost the river’s oyster population, CBF's Oyster Team placed 250 low-pro reef balls on state-protected sanctuary reefs and along designated shorelines at 5 sites in the Lafayette River. The reef balls, domed concrete structures full of nooks and crannies, are designed to attract baby oysters and help protect them from natural predators.  This river has had a great 'spat' set the past several seasons and we hope this year is no exception. These reef balls will provide a great surface for these baby oysters 'spat' to start a new reef. To tackle the reef ball job, CBF called upon its two uniquely designed oyster restoration vessels, the Patricia Campbell from Maryland and Chesapeake Gold from Gloucester, Va. 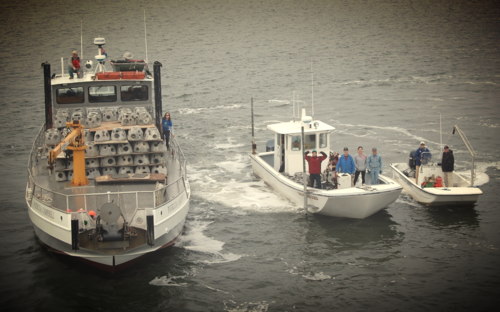 Other partners in the effort include Restore America’s Estuaries and the National Oceanic and Atmospheric Administration, funders of the project; the Rotary Club of Norfolk, which years ago raised money to build a sanctuary reef in the Lafayette; and the Virginia Marine Resources Commission, which oversaw construction of the reef and monitors its progress.

What an adventure, this great project wouldn't have been possible without some great teamwork from many orgainzations as well as all the volunteers who helped ensure planting 250 reef balls in two days seem like a piece of cake.

Photo Below- The Va Oyster Center in Gloucester, VA with reef balls ready to load, the deck of Chesapeake Gold loaded with reef balls for the trip to Norfolk, and VA Oyster Team Tommy Leggett, Jackie Shannon, and Sara Rogers.

Photo Below- A bobcat helping maneuver reef balls in position and 225 reef balls being loaded on deck of the Patricia Campbell.