It's That Time Of Year Again, Monitoring Oyster Reefs One Tong At A Time

Now that oyster larvae is now longer available, it's time to review the sanctuary oyster reefs that MD's Oyster Restoration Team seeded this year and monitor the conditions. Recently on a mild day the crew headed out in Oyster Stew (21 foot Carolina Skiff) to monitor the newly seeded sections of Jonas Green Reef in the Severn River. Captain Karl Willey and crew use shaft tongs to pull up small sections of the reef and collect data before returning the oysters back to the reef. Anchoring the boat and using a pair of shaft tongs in one location a small area of the reef can be cleared, data collected, and then analyzed later on back at the office. Most times this takes putting the shaft tongs on bottom in the same place four to six times. After the sample is brought aboard the shells are quickly cleaned off to make accessing the survival rates easier. On each reef site it's important to take several random samples throughout the site. This provides greater insight into what going on below the surface. Is one area of the reef doing better than another? Are there any predators such a flatworms present on the reef? Is there any evidence that the reef is reproducing?

Oysters Clumps Getting Rinsed Off.

So you are anxious to know, how is the reef doing? Jonas Green is a healthy and thriving reef. All of the samples included a number of healthy yearling oysters and/or baby spat. In every natural environment some mortality is expected. The samples revealed normal to high survival on this reef. One note that we want to keep our eye on is the presence of flatworms (round worm that is predator to oysters but naturally occurring the Chesapeake Bay) on this reef. 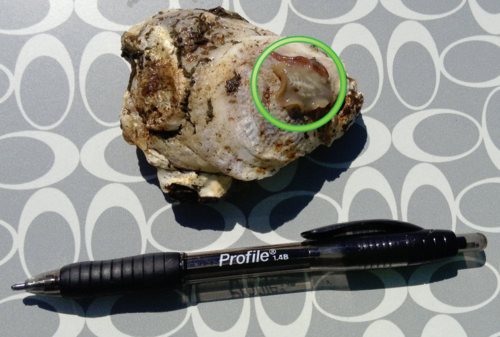 The millions of baby oyster 'spat' that were seeded this year have more than doubled in size in most cases and appear to be thriving. The larger yearling oysters remain in clumps with very little die off noticed after their first year on the reef. This a great sign! The conditions in the Severn River have not triggered a spawning event this season. After storm events the pulses of fresh water from the headwaters of the river is one factor limiting the Severn's spawning potential. Historically the Severn River didn't see 'spat' sets as frequently as other areas in the Bay. However historically the Eastern Oyster has survived/thrived in the Severn River. Oysters are making their comeback one creek, bay, river, and tributary at a time in the Chesapeake Bay. Each season more success stories are revealed in both Maryland and Virginia waters of the Chesapeake Bay, please continue to support oyster restoration in the Chesapeake Bay.

-Article by Meghan Hoffman and photos by CBF Staff & Partners